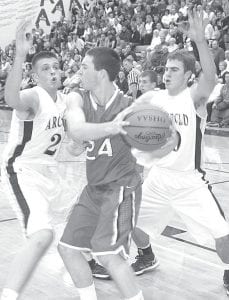 It doesn’t matter which cliché you use, barnburner or nail-biter, but one thing is certain: when Archbold and Wauseon kick off the boys basketball season, you’ll get one or the other.

Zeb Frank’s shot with 1.5 seconds left lifted Archbold to a 55-53 victory over Wauseon, Saturday, Dec. 1, in their non-league season opener at The Thunderdome.

“This was a great game to open the season,” said Doug Krauss, AHS head coach. “Both teams played their gourds off.”

Frank finished with just seven points, but the last two were the biggest.

Led by Tyson Dietrich, who scored seven of Archbold’s first 10 points, the Streaks held a 10-9 advantage just four minutes into the game, but it was all Wauseon from there.

Archbold finally regained the lead at the two-minute mark of the third quarter on a deuce by Frank.

After Dietrich converted a turnover into two points, Dugan Shadbolt answered for Wauseon. Collin Bzovi added two more, giving the lead back to the Indians.

Bzovi finished with 18 points, 14 coming from the foul line including two in the fourth quarter to knot the score at 53 with just eight seconds left.

Jay Miller closed out the scoring in the third for a 34- 33 lead.

The Blue and Gold led 40-35 just minutes into the fourth quarter after Evan Wyse hit at the charity stripe and converted a Dietrich steal into two more.

Frank added back-to-back steals and Dietrich added to his point total, while the Indians called for a time-out.

It was close the entire fourth quarter. Wauseon knotted the score at 40 with Bzovi hitting at the foul line.

Archbold rattled off the next four points with Dietrich hitting at the charity stripe.

Wauseon knotted the score at 49 when Michael Hammons, who finished with 12 points, came up with a steal and went the length of the court with 2:18 left.

Wyse converted a conventional three, giving the lead back to Archbold.

Bzovi hit two more at the foul line and Dietrich connected on one foul shot for a 53-51 Archbold advantage.

Bzovi was sent to the foul line one more time with 8.3 seconds left. The Wauseon senior calmly hit both shots, tying the score at 53.

The Streaks inbounded the ball. Frank headed up the court, getting off a shot at the foul line. The Archbold student section erupted as the ball hit nothing but net as time ran out.

“There were a lot of fouls called tonight,” said Krauss. “Luckily we have a long bench, and we used them tonight.

“A game like this– we have a four-point lead and boom, it’s gone. We will have to take this game and keep working on it and get better.

“The question is, do you call time-out after the made (Bzovi) foul shots? You go play.

“We know what we need to do. We wanted to get the ball in the hands of a guy who wants the ball, and Zeb made a play.

“The worst (that could happen)– we go into overtime. It was pretty good. Zeb made it with one second on the clock. That’s pretty good stuff.”

The Streaks won the rebounding battle 22-21, and committed 12 turnovers to Wauseon’s 18.