Four Return To The Links For AHS Golf 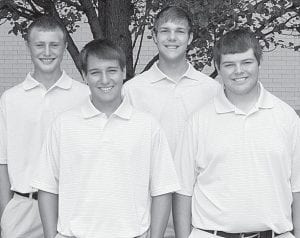 “I am really excited about the season to see what golfers have or will develop to become key factors in the success of this team,” said Kevin Miller, Archbold golf coach.

Miller returns his number two and three golfers from a squad that finished 15-5 and second in the Northwest Ohio Athletic League with a 5-2 record last year.

The Streaks won the sectional meet, and finished eighth at the district meet.

“These four guys will play a key role in the success of our 2010 season,” said Miller.

“Jarrett and Olley are solid golfers. Four of the remaining golfers have varsity experience from last year.

“We lost three of our top five golfers from last year, so the younger golfers will need to step up to the plate.”

Miller looks for Bryan, Liberty Center and Wauseon to be at the top of the league race.

“All have solid number one and number two golfers,” he said.

The fifth-year coach is optimistic that Archbold will be competitive for the top spots. He said Montpelier also will be a team to watch.

“I hope we will be competitive through the season and in the league. We always hope to improve records and scores each year,” said Miller.