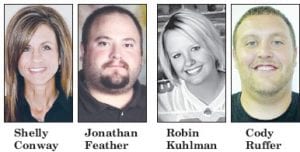 Two are teachers, one is an intervention specialist, and one is a school psychologist.

Shelly Conway, a native of Bellefontaine, taught for four years at Archbold in grades three through five before taking “time off to be a stay-at-home mom.”

After graduating from Bellefontaine Senior High School, she earned an elementary education degree from Bowling Green State University in 1995.

She taught at Archbold from 1996 to 2000. In her first year, she was the middle school cheerleader coach.

She returns as a first grade teacher.

She and her husband, Brett, have two children: Molly, 12, an Archbold seventh grade student, and Mason, 9, who is in the fourth grade.

Conway said she is “so excited and honored to be teaching again in the Archbold School District.”

Jonathan Fether, Delta, will teach physical science 9 and physics to freshmen and seniors.

Fether graduated from Delta High School in 2000. He received an education degree from the University of Toledo in 2009.

Prior to joining the staff at Archbold, he taught at Spencerville High School

Robyn Kuhlman, an Ottawa native, joins the staff as a school psychologist for grades K-12.

She is a 2004 Ottawa- Glandorf High School graduate. She graduated from the University of Dayton in 2007 and from BGSU in 2011.

Kuhlman holds a Bachelor of Arts degree in psychology, a Master of Education degree, and a specialist degree in school psychology.

She and her husband Jeremy expect a child in November.

Cody Ruffer is no stranger to Archbold. He is an Archbold native and a 2006 graduate.

He graduated from the University of Findlay in 2010 as an intervention specialist, specializing in students with mild to moderate needs in grades K-12.

His first job was working for the Northwest Ohio Educational Service Center at Swanton High School in 2010-11. He spent the next year at Napoleon Middle School.

He joins Archbold as a middle school intervention specialist, working with students in the fifth through eighth grades.

He will be an assistant wrestling and football coach.

“It was always my ultimate goal to one day come back and teach at Archbold,” he said.