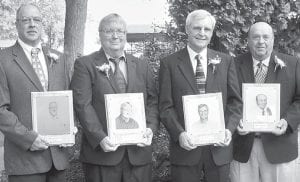 Rufenacht, of German Township, raises livestock and grows grain in a family partnership. He also is a co-owner of Pettisville Grain Co.

An innovator with a passion for agriculture, he has the desire to be a good steward of the resources he has been entrusted with. He views agriculture not just as a career, but as a gift, which allows him to do what he loves every day.

He is a founding member of the local Steer Feed Project through the Food Resources Bank. FRB mobilizes and increases the resources needed to support smallholder, agricultural food security programs in some of the world’s poorest villages. Over seven years, the project has raised $125,000.

He and his wife, Linda, traveled to Africa to see FRB projects.

Rufenacht also is a cofounder of Walt’s House, which helps individuals recently released from prison return to work and the community with supervision.

He is a member of several statewide groups, including Farm Bureau, Ohio Cattlemen, Ohio Corn Growers, and Ohio Soybean Growers. He is a life member of the National and State FFA Alumni.

Rufenacht was honored with the Mennonite Mutual Journey Award, and the Honorary FFA Degree from Pettisville FFA.

He is willing to share his knowledge and has hosted several high school classes, leading discussions about farming and helping students better understand the business of farming.

A dairy and crop farmer from Pike Township since 1963, Charles (Chuck) Riegsecker has milked cows for 41 years, and worked as a bookkeeper for Sterling Dairy Company.

He served nine years on the Delta Farmers Elevator Board, and was a member of the Fulton County Extension Advisory Committee.

He allowed the Delta FFA to use his farm for dairy and soil judging contest preparation.

An active member of his church, Riegsecker is involved in many activities, and held many positions, including church council.

Riegsecker was honored in 1997 as one of Farm Futures’ “100 Best Managed Farms,” as well as Ohio Master Farmer. He was selected as an Honorary Chapter Farmer by the Delta FFA.

Randy Crowl has led the Delta FFA program for more than 29 years. During that time, the agriculture education program at Delta High School has grown to more than 100 students each year.

His agricultural teaching and personal example have encouraged many of the students to continue learning and remain in Ohio, to become leaders in their communities.

Crowl’s former students say he is very laid back, motivates students to accomplish goals, makes classes interesting, and is a respected disciplinarian who loves to talk about his farm.

Jerry McDonnall has farmed in the Delta area for more than 43 years. His farm produces corn, soybeans, and tomatoes, and also features a vegetable harvester business.

McDonnall’s farming operation has adopted and adapted many technologies over the years, keeping the farm growing and improving. Much of the information he has gathered has been shared with other farmers.

He received an Honorary Chapter Farmer award in 2005 from the Delta FFA.

United Methodist Church of Delta has benefited from his leadership and talents. He served on the church board of trustees and was chairman of the board.

It is very useful to struggle with the habit of giving immediate expression to all of one’s unpleasant emotions.– Georges Gurdjieff