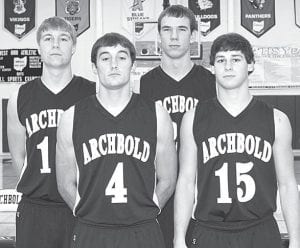 The Archbold boys basketball team, under Doug Krauss, head coach, had some key losses to graduation last year on a team that finished 19-5, claimed a Northwest Ohio Athletic League title with a 7-1 record, and advanced to the Division III regional semifi- nal.

With four solid letterwinners returning who saw valuable playing time last season, the Streaks could be a force to deal with in Northwest Ohio.

“We expect these returners to be our leaders at both ends of the court,” said Krauss.

“Telly Fricke, Garrett Morton, and Luke Kammeyer were our leading scorers last year, and we’ll look to them for scoring again.

“However, we’ll expect them to contribute at the defensive end again as well. Telly has started at the point for two years now, is good at getting to the rack, spots up well offensively, and can lock down defensively.

“We’re expecting him to continue his progress at the point and improve his decision making with the ball.

“Garrett had a fine junior season and is very capable of being a good scorer, as he has a nice offensive arsenal. We’re expecting him to continue his progress at the defensive end and also grab some more rebounds.

“Clay Giesige played off the bench as a junior, and we expect him to be a key contributor at both ends of the court.

“Luke had a nice sophomore season, and he’s a tough matchup for people with his size and athletic ability. We’re looking for him to continue to improve his game at both ends.”

Archbold will again look to push the ball up the floor and will apply defensive pressure to opposing teams. The Streaks gave up just 41.8 points per game and will look to equal that this year.

Krauss said rebounding will be a key. He stressed his team’s foul shooting needs to improve from last year’s 62% for the Streaks to have success this year.

Another area he hopes his team can improve on is converting turnovers into points. Archbold forced an average of 18 turnovers per game but didn’t convert a lot of those into points.

“Good teams make their opponents pay for their mistakes, and we’re looking to do a better job of that this year,” said Krauss.

“Like always, we hope to develop into a balanced team offensively, and be a team that can have five guys on the floor capable of scoring. We’ll be as good as our defense.

“Last year we gave up only 41.8 points a game, which was pretty good, but we need to capitalize off our opponents’ mistakes better this year.

“We’ll need to work hard to keep our defensive intensity up and give ourselves a chance to compete. With this team, playing with energy, passion, and intensity each night will give us an opportunity to compete.

“I feel we have a good mixture of players who will demonstrate the ability to play tough and play together.”