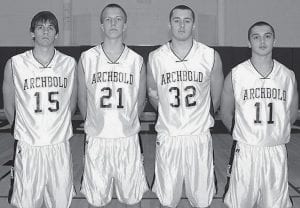 The Archbold boys basketball team, under Doug Krauss, head coach, kicks off the season Saturday, Nov. 24, at Wauseon with four returning senior letterwinners from a squad that finished 19-3, 7-1 in the Northwest Ohio Athletic League last year.

The Streaks suffered key losses with the graduation of Josh Wyse, Tyson Fruth, Andy Brink, and Dusty King, but of the four returnees the Streaks’ leading scorer returns.

“We have four senior lettermen who received valuable playing time last year,” said Krauss. “We expect these seniors to be our leaders at both ends of the court.

“Gene (Goering) is in his fourth year as a starter, and we’ll look for him to continue to contribute greatly with his scoring, rebounding, and defense.”

With just four returnees, Krauss said that “depth is a major concern for us, both inside and on the perimeter. We need to find guys to give us valuable minutes off the bench.

“With our lack of size, rebounding will be an important issue all season. We’ll be giving up plenty of inches most nights, so we’ll need to understand the importance of checking out and being tough inside.”

With the graduation of Wyse, the team’s point guard, Krauss is looking for someone to step up and contribute at that position.

Another area of concern for the Archbold mentor is guarding the post. With Goering coming in at 6-foot-3, he is the tallest returnee, but Krauss said that several juniors coming in could contribute.

“Due to our size, guarding the post will be an area that we’ll have to spend a lot of time on to be able to compete,” said Krauss.

“Last year’s team was very successful, and it was due to our team members understanding their roles, and they did them well.

“This year, like always, we hope to develop into a balanced team offensively, although we have to realize that we have to get certain guys touches as often as possible.

“We’ll be as good as our defense. Last year we gave up 45.4 points a game, which is pretty good. We’ll need to work hard to keep our defensive intensity up and give ourselves a chance to compete.

“I feel we have a good mixture of players who will demonstrate the ability to play tough and play together.

“With our experience, we should be able to realize that team chemistry is important, and that being able to accept a role on the team is key.”