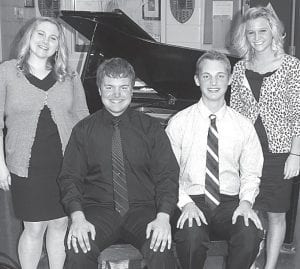 Four Archbold High School seniors are among 161 students from across the state selected to perform in the All-State Choir. From left: Julianne Sparks, Adam Steider, Caleb Wyse, and Gabrielle Deskins.– photo by David Pugh

Four Archbold High School seniors– the highest number to be selected from Archbold since the 1990s– will be part of the Ohio Music Educators Association All-State Choir.

The choir, which will perform at the OMEA convention in Columbus in February 2013, is chosen from hundreds, possibly thousands, of high school students from across the state.

Only 161 are selected for the group.

Gabrielle Deskins and Caleb Wyse, who were alternates last year, were chosen, along with Julianne Sparks and Adam Steider.

Steider auditioned last year but was not accepted, he said.

Kent Vandock, director of choral activities at AHS, said only six other schools are sending more than four to the state choir, and most of those schools had 600 to 800 students in each grade level.

The most any school is sending to the all-state choir is eight.

To qualify for the All-State Choir, students go through a “blind audition.”

Each student made a recording on a compact disc in May.

“The judges don’t know your name, they just see a number. Like, Caleb could be ‘T-1’ or something like that,” said Steider.

“You have to sing two scales, up and down, and then (a song that is) a Class A or B solo that was accepted for solo or ensemble competition.”

Sparks said making the CD can be nerve-wracking.

“You have to have everything right,” she said.

“You have to have it per- fect,” Deskins said.

The CDs are sent away for evaluation. Notification doesn’t arrive until late August.

But the foursome didn’t forget about their auditions, because they said Wyse wouldn’t let them.

“Caleb called all of us all summer, asking if we got our letters” stating that they had been accepted to the choir, Sparks said.

“He called me and told me to get home from work to see if I got mine, because he got his,” Deskins said.

In fact, he had not received the letter when he made that call.

Before the choir ever goes on stage, there are regional rehearsals in October and December. For this area, the rehearsals are at Otsego High School.

That’s followed by a statewide rehearsal at Otterbein University in Westerville, a suburb of Columbus.

Students travel to Columbus, Wednesday, Thursday, and Friday, Feb. 6-8, 2013, where they will rehearse again.

Rehearsal may not be the word for it, Vandock said. On Wednesday and Thursday they will rehearse from about 8 am to 8 pm, with lunch and dinner breaks.

Then, on Friday, the day of the performance, they will rehearse again in the morning, before the 8 pm performance.

Being selected for the All- State Choir is a big accomplishment.

“It’s my senior year, so it’s a really cool thing, in my last year of high school, to go out with something big,” Sparks said.

“Music means a lot to me. This is a great opportunity. I’ll learn a lot.”

“I think it will be a really good learning experience, to expand my musical abilities and learn stuff I don’t know now, that will benefit me the rest of my life.”

“I just want to take advantage of everything I can in high school,” Wyse said. “This is the biggest thing you can accomplish in high school choir,”

“I think I am so blessed just to be in the choir,” Deskins said. “I am so lucky God gave me this talent.”

Steider said they were all blessed to be Archbold students, with its outstanding choral program.

Kent’s wife, Danielle, helps him with the program.

However, Vandock cited the students and their hard work.

“I have to credit these guys, for breaking the odds,” he said.

“Statistically, the odds are we would send maybe one, or not even one,” to state choir.”