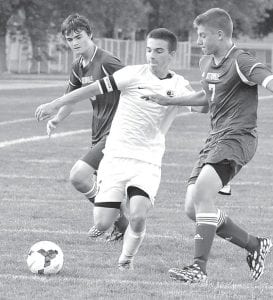 The Archbold boys soccer team hosted Ottoville (3- 3), Thursday, Sept. 10, and earned a 5-0 victory before entertaining Riverdale (1-2- 2), Saturday, Sept. 12, handing the Falcons a 2-0 defeat in a matchup of districtranked teams.

The Streaks (5-2) are enjoying a five-match win streak in which they’ve scored 20 goals and allowed none.

Senior A.J. Short poured in four goals for the week.

Short got the ball rolling for Archbold in the 11th minute when he tapped in a goal from 5 yards after a pass from Jeremy Lerma.

Eight minutes later, Austin Welch tossed in a long throw-in to Short for a header goal at 8 yards.

With ten minutes remaining in the half, Andrew Hogrefe’s give-and-go passing combination with Lerma led to a Hogrefe score from 10 yards.

Four minutes later, Gerson Calderon came off the bench to score from 18 yards on the left side with Hogrefe assisting.

One minute before the break, Short completed his hat trick by knocking in a penalty kick that Lerma earned when he was fouled.

The Streaks continued to control the Big Green throughout the second half, yielding significant playing time for the junior varsity.

The Streaks held a large edge in shots on goal (16-1) and corner kicks (9-0), with Archbold goalie Elijah Robison earning one save while Big Green keeper Dustin Trenkamp grabbed 11.

A tight contest was expected when the Streaks, ranked number four in the Northwest District, hosted fifth-ranked Riverdale.

Expectations were confirmed as the teams battled through the first 20 minutes with no score, despite numerous threats from both sides.

But in the 21st minute, Josh Kidder took a through ball from Kegan Ott and maneuvered around the charging Falcon goalie, enabling him to easily knock the score into the wide-open net.

In the second half, with 18 minutes remaining, and for the second time in three days, Welch and Short teamed up on a long throwin scoring combination, giving the Streaks an insurance goal.

Short took Welch’s throw out of the air with a rightfooted volley shot from 10 yards.

The Streaks out-shot the Falcons 9-2, with Robison getting two saves while Falcon keeper Jackson Hankins had seven.

The Streaks had a slight corner kick advantage, 4-3.