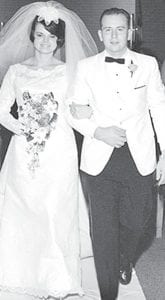 Lee Foth and Janet Borton were married April 5, 1969, at Church of the Nazarene, Fayette, by Rev. Myrland Stahl.

The couple will celebrate with a family dinner, and has planned a trip to Sedona, Ariz., in April and a family trip to Gatlinburg, Tenn., in June.