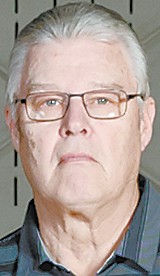 The Pettisville School Board received a letter in support of Charles Nafziger, high school math teacher, during its Monday, Jan. 14 meeting.

Hannah Hoops and Mikayla Rupp, both PHS graduates, presented a letter to the board that they said was signed by 110 people.

Hoops read the letter to the board at the meeting, and left a copy with the signatures with Dan Bruner, board president.

The letter said people were aware that there had been recent complaints about Nafziger, and that all those signing were in agreement that he is “a dedicated, respectable, hardworking, kind and passionate educator.

“He truly cares about all his students and he does everything in his power to help them succeed.”

In a later interview, Steve Switzer, superintendent, said, “Due to legal restrictions regarding personnel matters, I am not able to respond to any questions.”

He could not say whether or not a formal complaint had been filed against Nafziger, or what the nature of the complaint against him, if any, was.

He did say, “It’s nice to hear kids say good things about their teachers.”

When interviewed, Hoops said that several former students heard from current students that they were questioned at the school about Nafziger.

The former students wrote the letter in support of Nafziger, and in approximately one week were able to collect the 110 signatures from former students.

“If we had more time, we would probably have had many more former students who would have signed it,” Hoops said.

The letter went on to say that Nafziger has impacted the lives of countless students, both in the classroom and through coaching.

It said he was honest and patient with students, made himself available before and after school to help students, and even shared his personal phone number so students could call him if they needed help with math assignments.

Bruner accepted the letter on behalf of the board.

There was no comment from the board or discussion about the contents of the letter.

He thanked the two who presented the letter and moved on with the board agenda.

In personnel-related action, the board approved Marty Rupp and Gabe Jaramillo to be co-head track coaches for this school year.

The two will each receive an equal share of the combined supplemental contracts for head and assistant track coach.

Mike Lane, high school principal, said that both Rupp and Jaramillo were “outstanding individuals, both all-in” for the track athletes and the track program at Pettisville.

Switzer also said the district is still accepting applications for the head cook position, and hopes to fill the position in the near future.– D.J. Neuenschwander and David Pugh