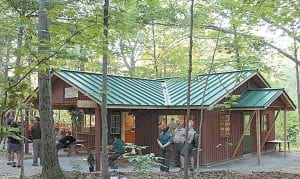 The former Pioneer Cabin that once stood in Ruihley Park is now the Bonnie Shook Nature Center at Boy Scout Camp Lakota, near Defiance.– courtesy photo

It took close to two years, but the Archbold Pioneer Cabin is back together, and has started on its second life.

The cabin, which stood in Ruihley Park, was carefully taken down in pieces in October 2015.

The pieces were loaded onto a semi truck and taken to Boy Scout Camp Lakota, outside Defiance.

Doug Speer, camp director, said once the pieces arrived, it was stored on camp property.

“We kept it as out of the weather as we could while we made preparations for its final positioning here at camp. Most of the structure was able to be saved,” he said.

A new concrete foundation for the building was poured in the fall of 2016.

“The building structure started going up shortly there after,” Speer said.

“Fortunately we had a very mild winter, which allowed us a lot of opportunities to work on it. There was a slight break, and then it took off pretty good again in the spring” of this year.

One part that wasn’t reused was the roof structure.

“The rafter system– there wasn’t a lot of reason to try to save it and the roofing material, so that was completely redone.” Speer said.

Built From A Kit

The Pioneer Cabin was originally built from a kit.

“You would have ordered it through a mail-order catalog. We have several buildings on our property that are very similar to this building,” Speer said.

“Our dining hall, our health lodge, the director’s cabin, and the administration building are all of a similar type.

“The kits are ordered in and it’s pretty much a panel type assembly when it arrived,” Speer said.

The Pioneer Cabin “kind of came apart in panels, and in some of the panels, there was some rot and other damage, so we downsized the building ever-so slightly,” he said.

“It’s not exactly like it was when it sat on its previous location, but it’s pretty darn close.” New Purpose

Today, the Pioneer Cabin has a new name.

“Funding to get this building erected came from a fund that was put aside in the name of a former camp director, Bonnie Shook,” Speer said.

“It was always her vision to have a building as a nature center.

“We teach a variety of merit badges that fall under the ecology conservation title.

“Some of those things, like mammal studies, fish and wildlife study, environmental science, nature, plant identification– are all pretty much related to nature, wildlife, and ecology.”

“I’ll call it a training center. I don’t want to say it’s a true classroom.

“Most of those badges are outdoor related, so we try to keep the kids outdoors.

“This building provides us with the opportunity to have permanent displays. We have fish tanks, we have turtle tanks, running water, and some tables.

“It’s a good place for our nature library, which has lots and lots of books that we’ve accumulated over the years. Bonnie donated a huge amount of books to our camp.”

All are housed in the Nature Center.

“It makes a very nice building for all of that,” he said.–David Pugh