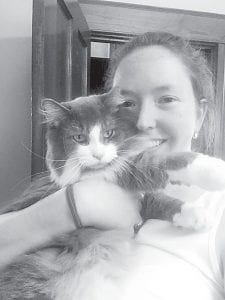 Sonya Huser and GusGus, the cat that attempted to move into the Archbold Community Library last year, where Huser is director. When GusGus refused to move on, Huser took him home to live with her and her other cats.– courtesy photo

It was just over a year ago that a stray cat walked into the Archbold Community Library “like he owned the place,” said Sonya Huser, library director.

A persistent sort, the male cat– then estimated to be about a year old– was put back out the front door– only to walk right back in the next time the door opened.

When he was put in Huser’s office, the gray cat made himself at home– on Huser’s desk.

After an attempt to keep him at the library failed, Huser ended up taking him home to live with her and her other cats. She named him GusGus.

So how is he today?

“GusGus is doing well!” Huser said in an email to this newspaper.

“He is, and probably always will be, a little rough around the edges, a little wild. Who knows what his back story is?”

Huser had to help nurse GusGus back to health.

“When Gus came to me, his belly was oozing from open sores, probably from cat fights.

“He was also FIV positive.”

FIV, or Feline Immunodeficiency Virus, is an incurable disease passed from cat to cat.

“I learned a lot about FIV. Since it passes through deep bite wounds, and not the type of biting that indoor cats do when they’re playing, we decided to keep him.

“Even though FIV positive cats can live normal, healthy lives indoors without passing it on, a stigma continues to surround them.

“I hope it changes, but many of the shelters I talked to at the time weren’t taking in FIV positive cats– even warning me that they would put him down automatically if I brought him in.”

She added, “Even healthy cats are a dime a dozen in shelters.”

Recently, Huser was looking at the whole process starting over.

“Funny enough, a few weeks ago almost a year to the day that Gus walked into the library, I went out to the garage to put some trash in the dumpster, and scared up a tiny kitten.

“Not sure how he found his way to my garage. I kind of assume that he was dumped, but he took no interest in leaving.

“And yes, I fed him,” she said, adding, “and yes, I know that means they have no incentive to leave…”

She said she could go to a shelter any time to pick up a new cat, “but it is very hard for me to not help a cat who comes to me– one like Gus, who came into the library, and this one who had somehow found his way to my garage.”

But this scared, hungry little kitten found another home with a technician at a local veterinarian clinic. Huser said the kitten took to the tech right away.

“Garage kitten got a new momma and a new name: Ace. I got my garage back,” she said.

“I understand that I can’t save them all, but it doesn’t stop me from wanting to.

Railroad Lights, Gates Up On West Barre RoadPettisville School Board Approves Contract For SwitzerCounty Board Of Elections Completes Security Upgrades