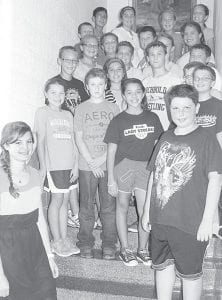 Rahel Frei, bottom left, a student teacher from Switzerland and former AHS foreign exchange student, with some of her sixth grade students at Archbold Middle School. When she was required to do an internship in another culture, she chose to return to Archbold. Her last day at AMS was Thursday, Sept. 12.– photo by David Pugh

Rahel Frei, a former Archbold High School foreign exchange student, enjoyed her time in Archbold so much that when an opportunity presented itself, she came back.

Frei left her home in Switzerland for the 2007-08 school year to be a senior at AHS.

Staying with Jim and Kristy Strawn, she said she “played a lot of sports. I ran cross country, I played basketball, and ran track. You get to know a lot of people while you’re here.”

She returned to Switzerland, and studied education in college.

“I want to become a teacher. That’s why I’m here,” she said.

Her college required her to do a foreign language internship, “just to get to know another culture, because a lot of students have never been out of Switzerland or Germany.

“We are usually placed somewhere in England. But if you organize it yourself, you can go wherever you want.”

She chose to return to Archbold, so she could visit with her host family “and combine everything.”

Her college program focuses on teaching children from first through sixth grades. She worked with Lori Luderman, an Archbold Middle School teacher.

Frei said she taught some enrichment classes, some social studies classes, and did things from running copies to helping individual students.

She enjoyed the experience, she said.

In one class, she and some sixth grade students baked bread from a Swiss recipe.

Part of the lesson involved converting from the English measurement systems of teaspoons and cups to the metric systems of liters and grams.

“I thought it was really complicated, but they (the students) understood how it worked,” she said.

She said she thought the English system was really complicated, “but they understand how it works.

“It’s hard to explain (the metric system) when for you, it’s logical, but to them, it doesn’t make any sense.

“But when I ask how many feet are in a yard, they know.”

Some of the misconceptions people had about Switzerland were hilarious, she said.

“The first time I was holding a presentation, the first thing we did was to guess whether things about Switzerland were true or false.

“The things they were thinking– like everybody had a cow at home.

“Yeah, not really, I’m living in an apartment,” she said.

“They thought we would dress differently.

“What was really funny, we were talking about TVs (televisions).

“A lot of people here have a lot of TVs, where in Europe, you have one in your house, but not more. They were just thinking that was ridiculous. That was really funny; they were just all over that TV thing.

“We don’t have a single one (television) at home. I grew up without a TV. Yeah, whatever– I’m still alive.”

She said she told her host sister, who is also studying to become a teacher, “You take all the good kids from all the Swiss schools, you put them together, and you have Archbold school kids.

“Here, you can just tell it’s a very religious area, and I enjoy that, because behavior wise, it’s a lot different.

“In Europe, you have to work on these things. I was teaching in the second grade, and everything you were doing was more like etiquette, like raise them, telling them what they’re allowed to do and what they’re not allowed to do.

“Here, you can just expect these things to be good, which is really nice.

“I’ve enjoyed it a lot here.

“Even when I was here on my exchange year, I thought it was one of the greatest years ever.”