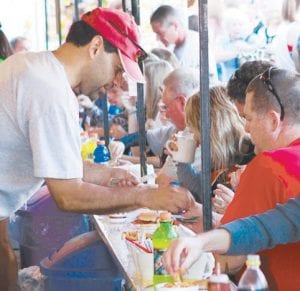 Ask anyone for a list of their favorite things at the Fulton County Fair, and it’s almost certain that food will appear somewhere on the list.

Or, more specifically, fair food, that special food that you can only get at the fair for only a few days each year.

The fair starts Friday, and those special treats will be available once again.

For many, each year’s trip to the fair involves mandatory stops at some food booths that are operated and staffed by local and county people.

“Some people come from Indiana and Toledo to get a milkshake and a sausage sandwich,” said Roger Crossgrove, one of those in charge of the Fulton County Dairy Association milkshake stand.

Mel Krill, a former Fulton County agricultural extension agent, said to the best of his memory, the milkshake stand got its start in the middle 1950s, possibly 1956, as a project of the Junior Leaders of 4-H, with the cooperation of the Dairy Service Unit. 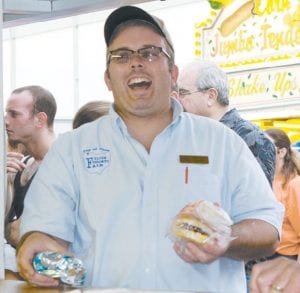 up sandwiches from the Fulton County Cattle Feeders stand in 2011; Drew Canada couldn’t decide on a

For a time, it was in a tent south of what is now the merchants building, and was under the grandstand for a while.

Krill said he believes the present milkshake stand building was put up in the middle 1960s.

Crossgrove said it’s been expanded at least twice, and a freezer and cooler have been added.

The milkshake stand was staffed by dairymen and their families; today, there aren’t enough dairy people around to keep the milkshakes flowing.

“The AHS Prom Committee, the parents, worked a shift or two,” Crossgrove said.

During the four biggest attendance days at the fair, from Friday to Monday, Crossgrove said the stand will sell 8,000 to 10,000 milkshakes. 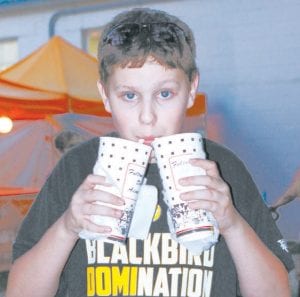 vanilla or chocolate milkshake… so he got both at the Fulton County Dairy Association stand in 2013.

Total milkshake sales during the six days of the fair?

The Dairy Association has donated money for the pool at 4-H Camp Palmer, Spangler Arena, and lighting in the dairy barn.

“We’ve donated quite a bit to the fair itself,” he said.

The group also has donated to Relay For Life.

Max Aeschliman, of the Fulton County Cattle Feeders Association, said he believed the group began serving food at the fair in the 1960s.

Their current stand, from which hamburgers, rib eye sandwiches, and barbecued beef are served, was built about 20 years ago, he said.

Like the dairy stand, Aeschliman said there aren’t enough cattle feeders in the county to staff the stand.

Twelve to 14 people work in the stand during the four biggest days; 10 during the weekdays.

With the exception of hiring people to help clean up, it’s all volunteer labor.

“At the end of each day, we get the stand spic and span,” he said.

The stand serves about 25,000 sandwiches, going through an estimated 5,000 pounds of beef.

Aeschliman declined to say how much money the stand raises, but the money raised stays in Fulton County.

Among those benefitting are Hospice, FFA clubs, the junior fair sale, Relay for Life, and the annual ag fest program for school children.

Another tradition is the Pettisville Music Boosters food stand.

It’s unusual because it provides a place to sit down and enjoy a meal with real silverware instead of plastic utensils, and a real cup for your coffee instead of something made from paper.

“It was already firmly established in the school prior to Dr. Switzer’s arrival 33 years ago,” Yoder said.

“It is most important to note that it is not run purely for or by the Music Boosters. This is because it takes the whole community to man the booth.

“The boosters donate almost half of the profit from the food booth to different organizations in the school, such as Family, Career and Community Leaders of America, library, art, and the school yearbook.”

Music students who work in the booth receive credit for each shift they work or any shift worked by family members or friends who work for them.

The credit can be used to offset the cost of music travel or music-related expenses.

The booth is known for “The Blackbird Special,” which is egg, ham and cheese served on a bun.

Dennis Wyse, president of the Fulton County Fair Board, said on Monday the fair will be ready when Friday rolls around.

On Monday, campers were arriving, rides were being assembled on the midway, and food vendors were getting things ready for the Fulton County Health Department inspectors, who are coming today, Wednesday.

Wyse said the Fair Board has spent over $200,000 on maintenance for this year’s fair.

“One of the things people need to see is the grandstand,” he said.

The board spent $90,000 painting the grandstand and putting a non-slip coating on the floors.

“It looks real sharp,” he said.

The Fair Board also upgraded the computer system.

As part of that upgrade, fairgoers can choose their seats for grandstand shows and print their tickets out at home.

Wyse said one man came in with his printed-at-home tickets but wanted to know where to get his “real tickets,” the ones you pick up at the ticket booth.

“It took five minutes to convince him that was his ticket,” Wyse said.