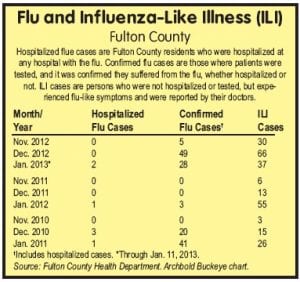 Officials with the Fulton County Health Department say the flu outbreak that has struck both the state and the nation is making itself felt in Fulton County as well.

Cindy Rose, director of nursing at the health department, said in December 2011, county physicians reported 13 cases of “influenzalike illness,” in the county.

State law requires only that physicians report influenza cases that are tested, and that tests confirm the person has the influenza virus.

“Most physicians do report weekly,” she said.

However, doctors have the option of informally reporting ILI, or influenza-like illnesses. ILI cases are patients who exhibit all the symptoms of the flu, but were never hospitalized or tested for the flu virus.

In December, Rose said two persons from Fulton County were hospitalized with confirmed cases of the flu. Both have recovered.

Rose said between Jan. 1- 11, there were 28 confirmed flu cases reported. There were also 37 cases of influenza like illness reported.

However, the symptoms of actual influenza and what many call the flu are not the same.

Rose explained influenza is an upper-respiratory tract illness. Its symptoms are cough sometimes with a sore throat, fever, and sinus congestion with a runny nose. Other symptoms include body aches, particularly in the legs and back. Headaches, sometimes severe, can also occur.

The most common symptoms are fever and a general malaise, a feeling of tiredness.

The most danger the flu presents is to those with underlying illnesses such as diabetes, heart disease, or asthma, or any other illness that causes trouble with breathing.

What many people identify as influenza, with stomach upset and vomiting, is more likely the work of a norovirus, not the flu.

While there are stories around the community of outbreaks of an illness that involves vomiting, Cupp said she had not heard of any.

Norovirus is responsible for 49%– nearly half–of all food-born illnesses, but can also be passed person to person.

For example, if someone vomits on a surface and that surface is not thoroughly cleaned, the virus can linger, to be picked up by the next person who touches the surface.

Norovirus can live on surfaces for extended periods of time.

For example, a common towel in the bathroom can be a source of norovirus. Cupp recommends paper towels, thrown away after one use.

There are precautions that can be taken to avoid the flu and norovirus. The biggest is frequent hand washing with soap and water.

For the flu and norovirus, those who are ill should isolate themselves from others.

Those suffering from the flu should cover the mouth when coughing around others.

Cupp said in restaurants, when surfaces are wiped, workers are required to use a sanitizing solution containing chlorine, the major component in bleach.

Chlorine will kill the norovirus, she said.

Rose said it is not too late to get a flu shot, or vaccination.

While it takes about two weeks for someone who gets the shot to develop the full level of immunization, Rose said the flu season lasts through the month of April, so the immunization can still be effective.

The vaccine is recommended for persons six months or older, but is considered especially important for children under the age of five, those over 65, and those with chronic medical conditions or compromised immune systems.