‘Flowers For Algernon’ Hits Your Feelings 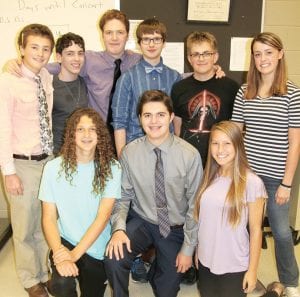 After a couple of comedies, the thespians of Pettisville High School are taking a turn to the dramatic side.

This year’s show is “Flowers for Algernon.”

Owen King, a senior who has the lead role, said the show “is about a 32-year-old man named Charlie Gordon. He is used in a scientific experiment to increase his intelligence, and he gets to the level of a genius.

“Then he realizes there is a problem with the experiment, and he and the mouse it was previously tested on before him go back into being mentally retarded again.

“It’s kind of a more serious play. This one hits you right in the feels.”

In his notes in the show program, Michael D. Short, director of the show, said the term is “unacceptable today in referring to persons with developmental disabilities.”

Ryan Rufenacht, a junior, said, “They said they were going to do that (use the term) because of the time period it was in.”

“It takes place in the 50s,” said Gretchen Lee, a senior.

“At that time, it was acceptable. So we’re just kind of rolling with that,” Rufenacht said.

“I think it’s pretty difficult, because I have to be really mean to him and I’m the one who wants to get rid of Charlie. I don’t want him in my house; he’s making my life terrible.

“I always have to be taking care of him, and so it’s really hard because I have to yell at a child.”

However, her “child” (King) stands at least six feet tall.

To get around that issue, King said Zachary Morris, a sixth grade student, and his brother Josh, a third grader, have been recruited to play Charlie as a younger boy.

King said the two are doing well learning their roles.

Liechty said in playing Charlie’s mother, she “typically wouldn’t do that (yell at a child) in real life.

Austin Rearick, a sophomore, has the role of Charlie’s father.

Rearick explained Liechty, in her role as the mother, is “very emotional. She’s up and down on the spectrum. She goes from chipper to completely angry in like 0 to 100.

“You play off each other in a very confusing and somewhat harder-to-perform dynamic.”

Zachary Basselman, a junior, said he plays the role of Dr. Straus.

“I am the neurosurgeon who performs the surgery on Charlie, and I’m also like his therapist kind of guiding him through the emotional struggles. I sort of fall in the middle on sympathy” for Charlie, Basselman said.

Other characters, he said, do not care about Charlie at all.

Lee said her character “is Alice Kinnian, and she is a reading, history, and mathematics teacher for mentallyenabled adults.

“She starts teaching a class that Charlie attends, and they get to know each other. She’s the one who recommended Charlie for the experiment to begin with, so throughout the play she’s kind of struggling with the fact that as Charlie gets smarter, she develops romantic feelings for him.

“She is immensely worried about Charlie the entire time, because the only reason Charlie’s in the experiment is she suggested him, so she feels a responsibility for anything that happens to him.”

Lee said playing Kinnian is not too difficult.

“I would probably say that she and I are very similar in the way we handle emotions, so that part’s not too difficult.

‘But I think it’s more difficult to understand what motivates her in some ways, and I had to dig a little deeper to figure out where she was coming from on certain levels.”

There is some comic relief.

Birch Baer, a junior, said he and Jacob Myers, a senior, “play two comic-relief characters, Joe and Frank. They work in a bakery with Charlie, and tend to take advantage of him.

“You would have to explain a lot of things to them (children),” one of the actors said.

“There’s nothing that would prevent a kid from going, there’s nothing inappropriate, but they probably wouldn’t understand most of what’s going on,” Liechty said.

“More than likely, they’d get bored halfway through and start talking,” another actor said.

Myers said Short “suggested if you bring your child to it, you use it as a conversation starter.

“I think this play will make you think about whether you are accepting of people who are different than you.”