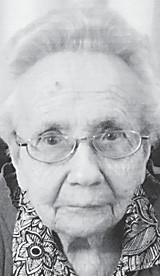 Flossie was born in Williams County, Ohio, on Dec. 28, 1924, the daughter of Louis and Wilma (Layman) DeLong.

She was an active member at the United Brethren Church in Stryker and enjoyed attending almost every Sunday until a short time ago. She also loved spending time with her family.

A Celebration of Flossie’s Life will be held at 11 a.m., today, Wednesday, at the United Brethren Church in Stryker, with Pastor Nick Woodall, officiating. Interment will be in the Oakwood Cemetery in Stryker.

The family requests that memorial contributions be given to the church.

Online condolences may be offered to the family at www.grisierfh.com. Grisier Funeral Home in Stryker has been entrusted with arrangements.