Flags Of Honor Event: A Chance To Heal 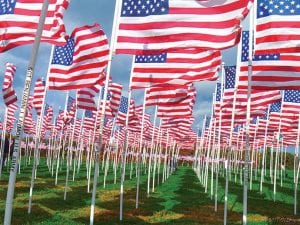 Some of the hundreds of flags that are part of the Ohio Flags Of Honor wave in the breeze. The mobile memorial to 294 Ohioans who served in the Armed Forces and lost their lives in the global war on terror will be at the Ridgeville Corners American Legion, Saturday and Sunday, July 29-30. A fallen service member’s name appears on the flag poles of 294 flags.– courtesy photo

There will be the flags of all 50 states, and United States flags.

On each of those flag’s pole is the name of an Ohioan who gave his or her life in the global war on terror, mostly in Iraq and Afghanistan.

The flags are the Ohio Flags of Honor, a traveling memorial created by H.E. Gino Zimmer, who lost his son, Nick, in Afghanistan in 2004.

Angelo Nuzzo, treasurer of Ohio Flags of Honor, said, “At the opening of the ceremony, we carry each of the 294 flags. We have some of the families of the fallen carry in their son’s or daughter’s flag.”

As each flag enters, Steve Brunn, military Survivor Outreach support coordinator, said two people will read each of the names of the fallen as his or her flag is brought in. A bell will toll.

When the last fallen service member’s flag is posted, the ceremony is over.

Brunn said he first came across Ohio Flags Of Honor on an Internet video.

“I watched it, and I couldn’t believe how touching it was,” he said.

“It was done by the people of the city (of Bellevue). So I got the crazy idea we need to do it in Northwest Ohio.

“Ohio Flags of Honor have never been west of Interstate 75,” said Brunn, who is from Wauseon.

So arrangements were made.

“When I was looking over my territory, I was wondering where we should do this,” he said. “So many times the bigger cities have some type of event. They have bigger parades; they have the recognition.

“Being from up around here, I knew the patriotism and everything was here. I basically said, ‘Hey, why don’t I try my home legion?’

Also during the day, Honor And Remember, an organization that presents flags to families of fallen service members, will give one mother a flag for her lost son.

Also on hand will be Rockie Lynne, an inspirational and motivational speaker, who will give a presentation.

A U.S. Army veteran, Lynne is the co-founder of another organization, Tribute To Troops.

“It’s going to be a full day, and Ohio Flags of Honor is going to be one of the cornerstones of the day,” Brunn said.

While there are some bleachers planned for the event, lawn chairs are encouraged.

The flags will remain standing until Sunday, July 30, at 2 pm. During the overnight hours, there will be someone on duty to assure no one vandalizes the memorial.

The memorial will be open for silent reflection until 9 pm Saturday night, and from 7 am-2 pm, Sunday.

Nuzzo said there are two times during the day when the memorial is particularly beautiful.

“The middle of the day, when the flags are flapping at full steam, and at night, when everything is quiet,” Nuzzo said.

Nuzzo said there are three aspects to the Flags of Honor memorial.

“There’s the honoring of the fallen, as we should as often as possible for the sacrifices they made for our country.

“Another is to let the families know we haven’t forgotten the sacrifice that their children have made.

“You can’t know how many people, how much it means to them, to have this memorial, to hear their son’s or daughter’s name called out in remembrance for what they have done.

“The third aspect: this has become a healing memorial. We’ve had a number of people share their stories with us. It’s absolutely remarkable.”

Nuzzo said, “There was a woman, probably in her mid- 80s, in Parma Heights, who lost her brother in World War II. She never had closure on his death until she had an opportunity to carry a flag in one of the ceremonies five years ago.

“She came up and told Gino and I about that.”

Nuzzo said two years later he was on flag watch at about 2 am.

“This is the time the bars close, so you have to be a bit more careful.

“The young man comes in, stops his skateboard. He sits down and takes his coat off, and he is wearing a Navy shirt.”

The young man asked a couple of questions about the memorial, then entered.

“There’s a cutout of a soldier kneeling before the battlefield cross, and the wreath is out there as well. He was kneeling down in front of the wreath.

“When he came back out, he shared with us the fact that some of his comrades were in there. He had served in the Navy.

“A lot of veterans will do that. They’ll come out at night when it’s quiet and they can be alone with their fellow brothers in arms.”

“You have to tell the one about the lady,” Brunn interjects.

“There was a woman– she was out in the field of flags on a Saturday afternoon. She was in tears.

“Gino walked up and said, ‘Which one of these (flags) is a child, a relative, someone you know?’

“She said, ‘No, I was a Vietnam War protester. I am so ashamed of what I had done. I’m just here seeking forgiveness.

“He put his arm around her and said, ‘As far as I’m concerned, you’re forgiven.’”