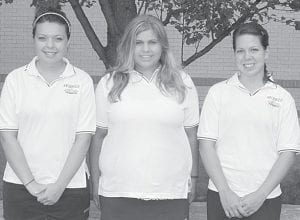 Even with five returnees, Auzins said her squad is still young and looks for improvement each match. Finishing 1-14 last season, the Streaks look to Erin Nafziger, Rachel Bowman, Kayla Belknap, Melissa Felix, and Ali Aschemeier to lead the team.

Lost to graduation were Kate Friesen and Bree Gobrogge

“This is my second year coaching, and I feel better prepared in what to expect and ready to bring new drills to better help the girls with their game,” said Auzins.

“We are still a very young team with only two seniors, but this will give the underclassmen an experience of what varsity is really like.”

Despite the youth of her team, Auzins is optimistic and looks to improve on last year’s record. She said she has a lot of girls with potential if they keep working at it.

“It’s going to be a learning experience again this year, but with the leadership we have from the upperclassmen I believe it could be a good season,” said Auzins.