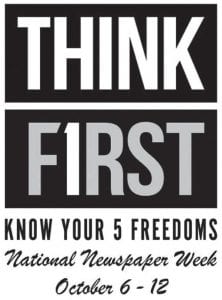 National Newspaper Week, Oct. 6-12, 2019, is the time newspapers across the nation celebrate their unique roles in American life.

The bedrock on which newspapers in the United States operate is the First Amendment to the constitution, which guarantees five basic freedoms: freedom of religion; freedom of speech; freedom of the press; freedom to peaceably assemble in protest; and the freedom to petition the government for a redress of grievances.

There are places in the world where men and women do not enjoy these freedoms. Radical theocracies impose their religion, in some cases, under penalty of death. Communist regimes go to great lengths to suppress religion.

China, North Korea, Saudi Arabia, and other nations deny the citizens freedom of speech, freedom to assemble and peaceably protest, and the freedom to petition their governments.

It is the freedom of the press– the right to gather and present news– that protects all the other freedoms. When wrongdoing attempts to suppress freedoms, newspapers expose that wrongdoing for all to see.

Newspapers are under attack from many sides. Most notably, they have been labeled an “enemy of the people.”

But Jim Zachary, deputy national editor for a newspaper conglomerate, said, “Far from being the enemy of the people, the province of a free and unfettered press is to help keep government in check and to defend the public against any assault on the five… basic American rights of freedom guaranteed by the First Amendment.”

Zachary said newspapers are not the enemy of the people or the government. “Rather,” he said, “they are the champions of ordinary men and women.”