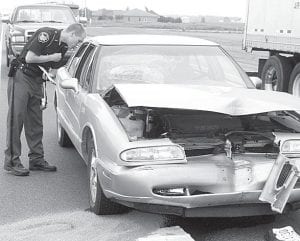 Top: This car was one of three involved in one of two crashes on St. Rt. 66, Thursday, Aug. 22, one of four on the highway, and one of five that occurred in the area between Wednesday, Aug. 21, and Friday, Aug. 23. Bottom: A girl was flown by helicopter ambulance to the University of Toledo Medical Center after this vehicle, in which she was a passenger, struck a utility pole and overturned. She has been released from UTMC.– photos by David Pugh

Tim Meister, FCCC superintendent, confirmed that some of those involved in the crashes, all of which occurred around 3:25 pm over the period of Wednesday, Aug. 21, to Friday, Aug. 23, were Four County students.

The Henry County Sheriff Department reports were not complete as of Monday.

The worst was a single-car accident that occurred on Henry Co. Rd. W at 3:21 pm, Friday.

The report states a car, driven by Jacob Alan Smith, 17, rural Wauseon, was traveling east when the vehicle went left of center. Smith overcorrected, then went off the right side of the road. The car struck a utility pole and came to rest on its top, about 100 feet west of Henry Co. Rd. 21.

The car was seriously damaged, with the back half of the vehicle being partially torn loose.

Smith and one passenger, Michael Heath, 17, Wauseon, were transported by Ridgeville Rescue to the Fulton County Health Center, where they were treated and released. 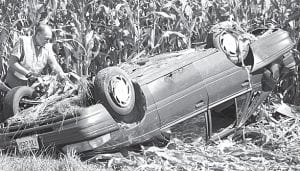 A third passenger in the auto, Carly Lee Verdin, 17, Wauseon, was taken by helicopter ambulance from the crash scene to the University of Toledo Medical Center.

No information about Verdin was available on Monday, but family members said she is home.

Archbold Rescue assisted at some of the crash scenes.

Another crash occurred at 3:22 pm, Friday, when a car, driven by a driver not identified by HCSD but owned by a rural Archbold woman, was traveling north on St. Rt. 66, and slowed in traffic.

Behind the unidentified driver was a pickup truck driven by Brandon D. Oyer, 17, rural Archbold. The two vehicles collided about threetenths of a mile south of Co. Rd. U.

There were no injuries.

Oyer was cited for failure to maintain an assured distance ahead.

A car, driven by Chyenne N. James, 16, Fayette, was driving north on St. Rt. 66, and was slowing for stopped traffic. A second car, driven by Brent A. Rittenhouse, 17, Napoleon, stopped behind the James auto.

James refused treatment from Ridgeville Rescue; Hancock was not transported. Roberts and Moses went by private vehicle to Community Hospitals & Wellness Center-Bryan, where they were treated and released.

Hancock was cited for failure to maintain an assured clear distance ahead.

A two-car crash occurred on St. Rt. 66 about 3:27 pm, Thursday, when a car, driven by Courtney Lee Bowers, 17, rural Napoleon, was traveling north and had stopped, waiting for traffic to clear to make a left turn into T.J. Automation.

The Norden car collided with the Spurgeon pickup, which was pushed into the Siedlecki auto.