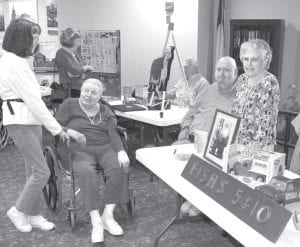 Jo Falcusan and Pauline Lantz, from left, chat with Marvin and Norma Fish at an exhibit for Fish’s 5 & 10, a store that operated in Archbold for many years. Norma said her husband’s parents, Arthur and Ruby Fish, operated the store; both she and Marvin worked there. Their exhibit of memorabilia from the store was part of the “Let’s Reminisce program” at the Fairlawn Retirement Community, Thursday, April 28. Several businesses that have since closed had displays set out in the Fairlawn Chapel.– photo by David Pugh