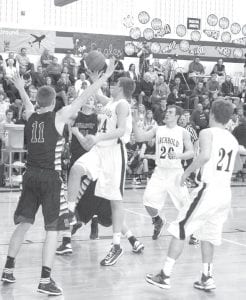 Luke Fisher (24), who beat the buzzer with a 15-foot shot that gave Archbold a two-point victory, takes a shot early in the Streaks’ sectional final with Swanton.– photo by Scott Schultz

“At tournament level all you have to do is survive. That really is the theme of tournament play– you survive,” said Doug Krauss, Archbold head boys basketball coach.

Survive is just what the Blue Streaks did in the Division III sectional championship game at Otsego High School, Friday, March 1, against Swanton (9-15).

Trailing by six points with under 20 seconds to play, the Bulldogs forced a pair of turnovers and drilled backto back three-pointers to knot the score at 57.

JD Sanderson hit the first three, closing the gap to 57- 54.

After Swanton’s last timeout, the Bulldogs forced a turnover on the inbounds pass.

Bryce McComb nailed the second trey to knot the score as precious seconds ticked away.

Fisher made the biggest basket of his varsity career, a 15-footer that hit nothing but net as the buzzer sounded for a 59-57 Blue Streak sectional championship.

“We knew this game would not be like the game earlier in the season,” said Krauss of the 65-28 AHS victory over the Bulldogs on Jan. 11.

“That is a good Swanton team.

It is Archbold’s 13th straight sectional title and 48th in school history.

A pesky Bulldog squad nipped away at the Blue and Gold all night.

Advancing to the title game with a 61-55 win over Patrick Henry, Tuesday, Feb. 26, the Bulldogs were looking to upend the Northwest Ohio Athletic League co-champions.

Even though track season is not here yet, the two squads came out in a full-out sprint, with Archbold leading 19-14 after a back-andforth first eight minutes.

Like in the season finale against Evergreen, Archbold’s Taylor Price came out of the blocks firing, scoring nine of his game-leading 18 points in the first stanza.

The Streaks held a slim 28-23 advantage at the half.

Rocky Robinson, who led a trio of Bulldogs in double digits, with 18 points, hit the first bucket of the second half, but Archbold outscored its counterpart 13-9 in the third, including the last six points.

Price hit a deuce and Jay Miller came up with a steal and went the length of the court for two.

Frank capped off the run with a pair of foul shots as the period ended for a 41-32 lead.

Frank and Miller each ended the contest with 12 points.

The Streaks took advantage of the foul line in the fourth, canning 8-14; Frank hit 6-6 in the second half.

Archbold built a 53-44 lead with under three minutes to play, but the Bulldogs just wouldn’t go away.

Forced to foul, the Bulldogs sent Frank to the line. The senior made both with 1:06 on the clock.

Three Swanton three-pointers in the closing seconds weren’t enough to upend Archbold’s sectional title reign, but one 15-footer from a 6-foot-7 sophomore was enough to add another sectional championship for the Streaks.

“We had a cushion, but we didn’t do well guarding threes in the late part of the game,” said Krauss.

“We didn’t care if they shot twos, but they hit some wideopen threes in the corner.

“Zeb had heads up to throw to Fish (Luke Fisher), and Fish had the wits about him to put it in the net.”