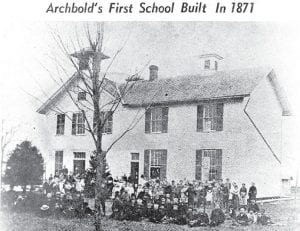 The first public school in Archbold was located on West Holland Street in 1871, which is now a blacktopped play area for elementary students. The land was donated by George Ditto, first resident of the village.

The first school house built of logs, was erected in 1852 on the corner of Lutz Road and Ohio Rt 2, on what is now the Grover Grime farm.

It was replaced by another school built on the same site in 1860.

Aaron Leininger, who was born in 1850, often said he attended school in the building erected in 1852 and walked from his home in the south end of the village.

There was no railroad, no wagon road through the woods of big trees to attend school in the log cabin building.

In 1971, a four-room, twostory frame school building was erected on West Holland Street lots that the Board of Education purchased from George Ditto for $400.

Ditto often told of selling the school site for the same amount of money he paid for the half section of land when he came to the village in 1838.

The new frame school erected in 1871 had four rooms, taking care of the children from the first through eighth grades.

There was a “high room” that had three grades. There were 250 enrolled, 25 being in the high room.

The building served until 1891, when the citizens of Archbold voted $16,000 to build the brick with stone trimmed modern school.

At the time, the Board of Education was severely criticized for having this new building face West Holland, a dead-end street.

In 1922, because of the increased enrollment, a small, two-room frame annex was built south of the old school which housed the first two grades.

Consolidation of the German Township schools with the Archbold schools took place in 1937.

Most of the rural, one-room brick school buildings were sold. All usable equipment was moved to the building in Archbold.

When the bicycle craze first hit Archbold in the 1890s, preachers said it was unlady like for a woman to wear bloomers and ride a bicycle.