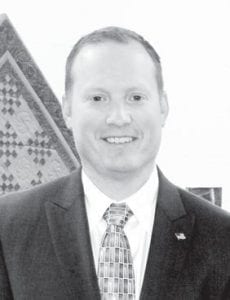 Rex was hired Monday, Jan. 7, to replace David Deskins, who resigned in June 2012 to take a position with the Penta County Career Center.

On his first day, Monday, Feb. 4, Rex said he visited all three Archbold school buildings, meeting with teachers and students.

Yesterday, Tuesday, he attended a meeting at the Northwest Ohio Educational Service Center and met superintendents from other school districts.

“I got some phone numbers of people I can call if I have questions,” he said.

He also said some Archbold students had stopped him and introduced themselves.

Rex said he met with Joe Long, interim superintendent, and discussed what Archbold schools have done in the past.

He plans to be in his offi ce from 5:30 to 7 pm on Mondays, with the exception of days when the Archbold school board meets.

Anyone can come in and talk to him about issues related to the school district, ask questions, or just stop by and introduce themselves.

“This was something I saw done in a school district in Columbus,” Rex said.

Rex said as he has gone around the district, he hasn’t seen anything that needs to be fixed or addressed right away.

He plans to meet with Dave Davis, building supervisor, “to talk about things that he sees that need to be done over time.”

Included will be discussions of energy efficiency measures.

So far, he said he is feeling positive about his new job.

“Everything is what I thought it would be.”

I have always thought the actions of men the best interpreters of their thoughts.– John Locke