Firefighting A Family Affair For The Beneckes 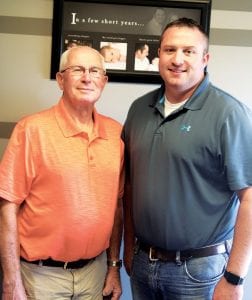 Dexter Benecke, left, and his son Dan are part of a family that has been fighting fires in Ridgeville Township for three generations. Dexter was chief of the Ridgeville Township Fire Department for 20 years, retiring in 2012. Dan became the department chief in July.– photo by David Pugh

Service to Ridgeville Township and the community of Ridgeville Corners goes back a long way for the Benecke family.

Delmar “Jack” Benecke was on the fire department in the 1940s.

In the early days, property owners bought stock or a share in the department that entitled them to fire protection.

Dexter, Jack’s son, said it was his father that made the motion to turn the department over to the Ridgeville Township trustees.

Dexter’s son, Dan, joined the department in 1997, was promoted to captain, and was named chief after a recommendation from department members. He was confirmed by the trustees on July 10.

When Dex turned 10, his father left the department.

“That’s when I got involved, because I used to go down to the school when they had practice,” Dex said. I remember one time, they put me up on top of the school and had to carry me down.

“I’d ride my bike down there anytime they were out with the fire trucks practicing.”

“And the same here when Dad was on,” Dan said. “I would be victims for mass-casualty accidents. I remember I was the arsonist…”

“I was the arsonist for the county-wide training at the fairgrounds when the grandstands were supposedly on fire,” Dan said.

Dexter said when Dan was little, “the pager would go off, or actually, we probably had phones back then. He would run over and get in bed with Mom and listen to it (the fire) on the scanner.”

“I knew Dad has the scanner in his bedroom, so I would go over there and sleep the rest of the night until Dad got home and carried me back to my room.” Dan said.

Dan added when the pager went off, his dad always went.

“Even from the lake (the family lake house in Michigan),” Dex said.

When Dexter was chief, was Dan a good firefighter?

Whatever the task, “It’s gotta be done,” Dex said, without skipping a beat.

Once, for a big fire in Napoleon, Dexter took Dan along to take photos.

“I took him along. ‘You can go along, but you gotta stay out of the firemen’s way, and you can take as many pictures as you want. He got some good pictures.” Dex said.

The department operates a cadet program for youngsters who want to learn more about the department. Cadets can’t do much, Dex said, but they can go out for training.

Dan and his wife Gina, herself a trauma program manager at Mercy St. Vincent Medical Center, Toledo, have three daughters: Autumn 9, and twins Ellison and Kayla, 6.

With more and more females becoming involved in firefighting, does Dan see his girls getting involved?

Dan said, “The younger two, I don’t know. The older one, the thought of blood… ‘Mommy, Daddy, I can’t believe you do what you do.’”

“Of course, when you have children of anyone who is a first responder, EMS, a nurse, or a doctor, whatever, you know, those kids are the ones who have to stay 10 feet away from the stove, can’t climb any higher than five feet off the ground…

When Dexter was asked if that was the way it was for his kids, the only response is laughter.

With more two-income families, and the time commitment involved in being a firefighter, it’s becoming difficult to find recruits.

Dan said his wife works as much as he does.

“Now, I’ve got to figure out,okay,it’sa4amcall,am I going to be able to be home in time for my wife to leave for work, and now I’ve either got to find a sitter or I can’t make the call.

“And that’s the whole department now.

How proud is Dexter of his son?

“Real proud for the accomplishments he’s made,” Dex said.

Is Dan a good fire chief?

“I groomed him for that,” Dex said.

How proud is Dan of his father?

“I’ve always looked at him as my superhero. I’m very proud,” Dan said.