Fire Department Named Community Supporters Of The Year For 2020

Archbold firefighters called in their biggest weapon, the aerial tower truck, to fight this Saturday, June 6, 2015 fire at the home of Vond and Mary Hall on Walnut Street. The 36 current members of the Archbold Fire Department were selected by the Archbold Lions Club as the “Community Supporters of the Year” for 2020.– Buckeye file photo

The Archbold Lions Club and other organizations have selected the Archbold German Township Fire Department as the 2020 Community Supporters of the Year.

The department will be honored on the top of the annual Lions Club birthday calendar, which includes birthdays, anniversaries, and other events throughout the year.

He doesn’t believe the members of the department “get into this for the recognition.

“We get in to serve. I think everybody has that same mindset.

“It makes us feel good” to be recognized, he said.

“It makes us feel that we’re doing a good job for the community by receiving recognition, that people are pleased with the service.”

“When you consider the Covid, and all that we’ve gone through in the last year, they’ve been right at the forefront of that.” 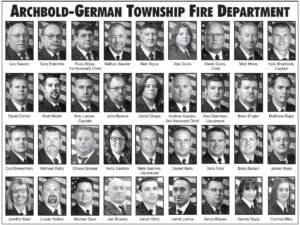 The fire department has spent a lot time and effort training to deal with the Coronavirus, “and technically, the risk hasn’t gone away,” he said.

“It’s kind of hard for me to put into words as to why this is such a great thing, but it is. It’s recognizing a group of people instead of an individual.”

“We are so blessed to have an active volunteer fire department. I still call them volunteers.”

Department members are paid only for the time they actually are on duty, such as when they respond to a fire.

A “volunteer” department is becoming more and more rare, not just in Ohio but across the country.

“Our community is blessed to have 36 volunteers. We can’t thank them enough,” Leupp said.

No Citizen Of Year

John Poulson, Lions Club first vice president, said the Community Supporters of the Year will take the place of the annual Citizen of the Year for 2020.

Members of the Lions Club, along with representatives of the Archbold Rotary Club, Archbold Area Foundation, Archbold Area Chamber of Commerce, and Archbold Area Ministerial Association, normally select a person as the village Citizen of the Year.

The Citizen of the Year is honored at the annual AACC Chamber of Commerce Banquet in the fall.

But with the restrictions put in place as a result of the Coronavirus pandemic, there was no banquet, and no Citizen of the Year, in 2020.

Poulson said when it was determined there would be no 2020 Citizen of the Year, he contacted the other members of the selection group to see if they liked the idea of honoring the fire department.

“They all did, so we kind of decided (to honor the fire department) last fall,” he said.

“Then we decided not to go ahead and publicize it (until now).”

Poulson said the Community Supporters of the Year award will stand in place of Citizen of the Year for 2020, and maybe 2021, depending on the COVID situation.

“We are not planning on replacing Citizen of the Year,” Poulson said.

Poulson was asked why the fire department was selected.

“Just because of all the extra concerns with COVID, and the fact that they serve,” he said.

Karlin Wyse, a Lion and himself the 2014 Citizen of the Year, first suggested the idea of honoring AFD, Poulson said.

“He didn’t think ‘Citizen of the Year’ was the right name, since that implies only one. So we thought about community supporters.”

In describing the fire department, Poulson said, “They’re a ‘community in mind, all of the time’ kind of team.”