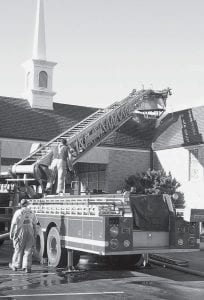 A fire in the attic of the Trinity Lutheran Church, Wauseon, did about $200,000 damage Saturday evening, said Rick Sluder, assistant Wauseon fire chief.

Eight departments, including Archbold and Ridgeville Corners, were on scene to battle the blaze.

Sluder said Jerry Bostelman, a retired WFD assistant chief who is a janitor at the church, smelled smoke. There had been a wedding and an evening church service with many burning candles.

"His (Bostelman’s) nose smelled it. A lot of people dismissed it as the candles, but he said that wasn’t a candle smell," Sluder said.

Bostelman checked the building and discovered the fire when he looked in the large attic.

At 6:04 pm, Wauseon Fire Department was called, and advised flames were showing. Wauseon called for Archbold and Napoleon fire departments.

Sluder said firefighters took their hoses inside the church, went through access holes into the attic, and attacked the flames, which were "rolling up and hitting the ceiling, and rolling down and hitting the walls.

"It was kind of like something you’d see in the movies."

Because of the attic size, and because there was a lot of blown-in insulation, Lyons and Morenci fire departments were called for their insulation vacuum systems; Archbold has one, but it was not used.

The only way to battle a fire in insulation is to vacuum it out of the structure, Sluder said.

Delta was called for more manpower, as was Liberty Center.

Tarps were placed inside the church to limit water damage, but it was still "a big mess.

"We got it knocked down quickly, so it was not a major disaster," Sluder said.

Sluder said the cause is offi cially listed as undetermined, but it started in an area where there was a large amount of electrical wiring. The insurance company may hire engineers to determine if wiring was the cause.

An official from the State Fire Marshall office was on the site Monday. Damage was estimated at $200,000, "but depending on water damage, it could go higher," Sluder said.- David Pugh