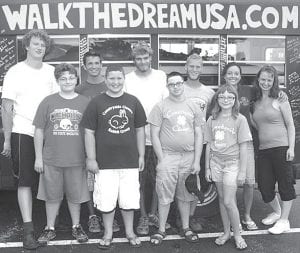 Reporters with the Countryside Clovers 4-H Club interviewed a group of filmmakers, Monday evening, June 14. The filmmakers are making a documentary as four of them walk across the United States. Front row: 4-H reporters Nathanial Ballmer, Jacob Nofziger, Austin Double, and Brynn Ballmer. Back row: filmmakers Tim Schroth, Blake Wink, Josh Vanbuskirk, Dan Petracca, Sara Klem, and Holly Nickeson. Schroth and Nickeson are producers who drive the support van ahead of the four walkers. The walkers said a pair of shoes lasts 600 to 700 miles.– photo by David Pugh

The group, four men and two women ages 20-27 from Rochester, N.Y., are conducting interviews and shooting video footage for a documentary movie project, “Walk The Dream.”

Recently, the group stopped in Millbury to assist with tornado cleanup. The night of June 5, they stayed in Huron, close to Millbury.

Klem, the oldest, said, “We don’t get tornadoes in New York. We don’t even have the sirens. We were sleeping right next to a siren,” she said.

Wink said he was working a full-time job on movie crews, then considered working other film projects.

He said many people have walked across America, but it’s never been documented. After meeting with this group of aspiring filmmakers, they said, “‘yeah, we could do that.’”

Their goal is to walk from Long Island, N.Y., to Long Beach, Calif., actually touching the ocean on both coasts.

They set out April 21, and plan to finish the trip in November.

Because the project has little to no budget, they opted not to spend $2 to take a train to the ocean; so they walked there. “We did 18 miles before we started.”

They have walked 36 miles a day; but when injuries began showing up, they decided on 20.

The four walkers of the group are determined; they will not accept a ride. If they stay in a hotel, and a restaurant is a mile away, they walk.

Petracca said, “People will see us walking with our backpacks and wonder, what’s going on. After a little conversation, they ask us spend the night in their home, and open their refrigerators to us.

In fact, people have allowed us alone in their home, while they run errands,” he said.

There have been downsides. Once, they parked the van in front of a man’s house, and upon approaching him, he said, “That’s far enough.”

Another time, someone threw a beverage can at them.

They arrived in a town where they were planning to stay after a 30-mile walk, at 3 am, in the rain. They realized none of the streets on the map matched where they were.

Wink said they spent a day walking around the Cedar Point amusement park. The miles they walked there don’t count toward their total.

After spending the night at The Arch Motel, they set out for Chicago.

Wink said before the trip, he wouldn’t think of putting someone up in his home.

“Now, I’ll never turn anyone away.”