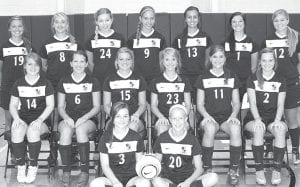 Last year was no exception. The Streaks recorded a 19-2- 1 record, was a perfect 5-0 in the Northwest Ohio Athletic League, and advanced to the Division III state semifinal.

“Last year was an amazing season for Archbold soccer,” said James Kidder, head coach, who has spent the last seven years at the helm.

“High school girls soccer went to three divisions in the state of Ohio. Therefore, the tournament run matched us up with schools closer in size than in past years.

“The girls made it to the Final Four after several very exciting tournament games.”

AHS lost four lettermen to graduation: Carley Wyse, who was All-State; Mindy Rupp, All-District; Sierra Nofziger and Nichole Wood, who were both All-NWOAL.

Despite those key losses, the Streaks “look to be very strong on the offensive side this year, with Lauren Kindinger, Cassidy Wyse and Jesse Fidler all returning in the midfield,” said Kidder.

“Aside from the starting 11 on the field, our team has quite a bit of depth this year.”

“Our team will have several people who contribute to the offensive side of play, with many players being capable of putting up lots of goals,” said the mentor.

It’s not just the offense that has Kidder excited. The Streaks also look strong on the defensive sides.

“Historically, we have been a very strong defensive team.

“Our defense is young this year, but quite strong, led by Alexa Coressel, Kassidy Garrow, and Jensyn Garrow,” said Kidder.

“The new players stepping into positions vacated by graduating seniors will be key role players this year.”

The NWOAL title last year was the first in not only school history, but also in NWOAL history.

“Luckily, enough teams will be participating so that the league will stay intact,” said Kidder.

“Winning the league the first year ever was a goal of the whole team last year, and we would like to do the same again this year.”

Kidder anticipates that “Swanton and Wauseon will be strong teams and give us the most competition as we move through the season.

“But as the game gains more popularity in the surrounding area, all teams have improved tremendously, and it is really anyone’s guess who will come out on top.

The Streaks are scheduled to open the season, Thursday, Aug. 23, at Springfield.