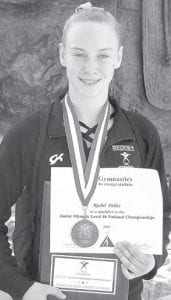 She is the daughter of Lynn and Diane, formerly of Archbold.

Her vault score of 9.75 placed her in first place out of 56 competitors that had qualified for the national championship.

Her Region 7 team placed third in the team competition. It was her first trip to the national championships.

In the state qualification meet, Fielitz won the New Jersey, Level 10 State Gymnastics All-Around title on March 20. She also won the vault with a score of 9.65, a New Jersey record.

She placed second on both the uneven bars with a 9.2 and balance beam with a 9.45 and earned a fourthplace finish on the floor with a 9.25.

Her All-Around score of 37.525 earned her the state title and qualified her for the regional gymnastics meet.

At the regional competition in Chesapeake, Va., on April 11, Fielitz placed second on the vault with a 9.6 and fifth on the balance beam with a 9.0.

She finished sixth with an All-Around score of 36.375, which qualified her for the national championships.

Fielitz is a freshman at Wallkill High School and was the Connecticut Level 8 All-Around Champion in 2006, second in Level 9 All- Around in 2007, and second on the vault at the Eastern Nationals in 2008.