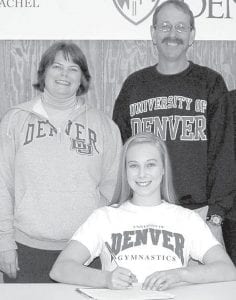 Rachel Fielitz, a senior at Chapel Field Christian High School, Pine Bush, N.Y., signs a national letter of intent to perform gymnastics at the University of Denver, a Division I school. A Level 10 gymnast who competes for Eastern National Gymnastics Academy (ENA) in Paramus, N.J., she was the JO National Vault Champion (Junior C) in 2010 and her team is the Level 10 New Jersey state champions two years in a row. She also has been the New York, Connecticut and New Jersey all-around state champion as well as regional and national qualifier. With her are her parents, Diane and Lynn, Walden, N.Y., and formerly of Archbold.– courtesy photo