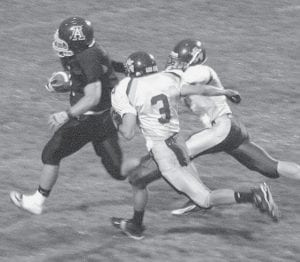 With a pair of Vikings in pursuit, Jacob Fidler races down the field for his first of a six touchdowns in Archbold’s 48-21 victory over Evergreen. The six TDs were a school record.- photo by Scott Schultz

It’s been 20-plus years, but an Archbold record fell in the Streaks’ 48-21 rout of the visiting Evergreen Vikings, Friday, Sept. 12.

Fidler also moved up to the number-three spot for most yards rushing in a game, totaling 268 yards on 22 carries.

Tim Grieser holds the first and second spots. Grieser rushed for 338 yards in a 1970 game against Northwood. That same year, Grieser also rushed for 302 yards against Montpelier.

Archbold, which was ranked fifth in Division V in the first Associated Press Ohio high school football poll, stays perfect at 4-0, 2-0 in the Northwest Ohio Athletic League. The Vikings drop to 1-3, 1-2 NWOAL.

“They had a hard time matching up with our speed,” said John Downey, AHS coach. “We were able to do some things and get outside and stretch their defense.

“Jake (Fidler) did some good things on his inside running game, letting the hole develop. Jake has tremendous explosion, and he could explode through the hole.”

Taking advantage of two Evergreen turnovers in the first quarter, Fidler scored on runs of 37 and 10 yards. He added a 4-yard touchdown run for a 21-0 lead after the first 12 minutes.

Fidler outraced his counterpart on a 41-yard touchdown run in the second quarter, while teammate Breon Price added a 50-yard run for a 34-6 halftime score.

Fidler also rambled 24 yards for a score in the third. His sixth TD came on a 9-yard run in the fourth.

The Archbold defense, coming off a stellar Sept. 5 performance against Fairview, shut out the Vikings in the first quarter and allowed just one score in the second on a Jordan McCready 4-yard run.

The Vikings added two more scores late in the game as both teams put in junior varsity players.

“We came out and took care of business in the first quarter,” said Downey. “We played well early, but we did have too many penalties later on in the game. We have to clean that up.

“All in all I thought we controlled the line of scrimmage on both sides of the ball.”

The Streaks go on the road to Swanton for a Northwest Ohio Athletic League contest, Friday, Sept. 19.