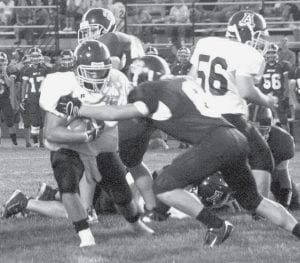 The Golden Bears, under Travis Cooper, first-year head coach, were hoping to build on a 13-10 win over Van Wert in the first week. But the Streaks had other plans, thumping them 49- 21.

“Our special teams play was outstanding,” said John Downey, AHS head coach. “We had great kickoffs and kickoff coverage, along with good punt coverage, and we had good return yardage on our punts.

“We got good field position off our special teams, and then we got a lot of turnovers and a short field.

“Our offense was not real effi- cient and didn’t execute as good as we should, but at the same time we were able to punch it in and put points on the board.”

AHS got on the board early. David Rupp scored on a 2-yard run and followed with a 7-yard pass to Christian Goering minutes later to put the Streaks up 14-0 as the first quarter ended.

Bryan’s lone score came at the 11:19 mark of the second when junior quarterback Cody Keil hit Levi Fisher for a 27- yard touchdown toss.

Aaron Bontrager connected on a 30-yard field goal for a 17-7 AHS lead with 3:20 remaining in the half.

Rupp passed the wealth around, hitting Drew Smith for a 13-yard touchdown toss with 36 seconds left and a 23-7 lead at the break.

Rupp crossed the goal line on a 13-yard run in the third quarter; he led the ground game with 137 yards on 20 carries. Fidler wasn’t far behind, with 111 yards on 16 carries.

“David (Rupp) has a lot of moxie, he has a lot of confi- dence; he runs the show,” said Downey. “He knows what we want to do and where the ball should go. He can make a lot of things happen and put a lot of pressure on defenses.”

Fidler crossed the goal line twice, from 1 yard out in the third and a 22-yard dash in the fourth.

“Bryan did a good job on Jake (Fidler) and was eye-ballin’ him so much we were able to take advantage of other situations,” said Downey.

Also making the highlight reel was Nate Hammersmith; late in the fourth he had a 12- yard TD run.

It wasn’t just about offense; on the defensive side, AHS held Bryan to negative yards until late in the fourth when Cody Robinson went 80 yards for a score. Bryan finished with 64 rushing yards and 174 passing yards.

The Bears were plagued with four interceptions; Rupp and Fidler each picked off two.

The Bears put together a 15- play drive at the start of the third quarter as Keil tossed 10 passes and Cody Constanzo capped it off with a 2-yard run.

“For the most part we did a pretty good job” on pass defense, said Downey. “We came up with a couple of picks. I thought our run defense was outstanding all night long.”

“Turnovers and special teams killed us,” said Cooper. “We were in the game even after we played terrible. Up front in the trenches we were losing the battle and getting out of our game plan.

“We battled back and then we would just give up the big play. It just kept happening over and over again.

“Archbold’s a good team. They have good athletes and speed, and they were able to capitalize on mistakes and play the game on our side of the field.”

Archbold travels to Fairview, Friday, Sept. 5 to face the highpowered offense of the Apaches.

It is the eighth meeting between the two. Fairview holds a 4-3 edge. The last time AHS won was in 2004.

“Fairview is just a whole different beast,” said Downey. “Not to take anything away from the Bryan kids, but Fairview has their receiving core back from last year and are better athletes.

“We will have to bring our A+ game, and then some, if we want to stay in the game.”