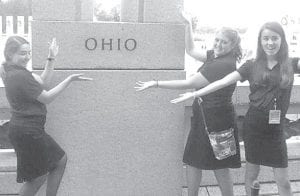 Hannah Meller, Mikayla Crouch, and Erin Betz, from left, visit the World War II monument in Washington, D.C. The tour of the monuments is a way to connect to many times and activities throughout history.– courtesy photo

Along the way they stopped at the Hershey’s Chocolate Factory and Gettysburg War Museum in Pennsylvania. Both stops added to their knowledge of agriculture uses and history.

More than 1,800 students were registered for the 2013 Washington Leadership Conference, which spanned six weeks. That is one-half of one percent of the FFA total membership.

FFAers spent the week under the guidance of educational professionals, counselors and professional FFA staff members.

In workshops, seminars, and small groups, the students focused on identifying and developing their personal strengths and goals and participated in comprehensive leadership training that will help them guide their local FFA chapters.

They also met with the staff of Robert Latta, U.S. Representative.

At the conclusion of the week, a service project was done. They helped pack back-to-school bags, made back-to-school posters and cards, and created gym games for kids in two local middle schools.

The project was to help kids who want to come to school, and help to decrease the student dropout rate.

Everyone who left WLC left with a changed mind to the importance of leadership.

Betz was mostly impacted by the poverty statistics and was surprised to hear about how common is homelessness.

Her eyes were opened throughout the trip at WLC and she won’t forget the impact on the students.

Meller and Crouch said the most dramatic thing at WLC was the poverty dinner. Students were divided into four groups: the wealthy, middle class, poor and homeless, and the natural disaster homeless.

The wealthy received a three-course dinner, and the middle class had a buffetstyle meal.

The hardest thing to grasp was that 75% of the world’s population is homeless.

After returning home the girls were excited and very motivated to continue progressing on their Living to Serve (LTS) plans.

LTS plans can vary from trying to end poverty in a local community to collecting school supplies for local students.–Mikayla Crouch, reporter