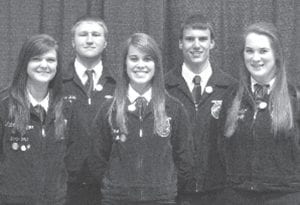 The Pettisville FFA chapter attended the State FFA convention in Columbus, Thursday and Friday, May 2-3.

Two members were state finalists in the proficiency award area.

Both received cash prizes and a plaque.

Meller’s project involved growing lettuce in various systems and the effects the systems have on production.

Nofziger grew spinach in various environments and tested the sugar levels of the spinach.

Meller received a $440 scholarship from the Ohio FFA Alumni to attend the Washington Leadership Conference in the summer.

Each third grade class at the Archbold elementary school joined a large group of FFA officers and members to learn about key safety precautions when in a rural setting.

Members set up eight stations in and around the ag science barn. Each station dealt with a different example of how to stay safe on the farm around the home.

Some examples were first aid, ATV and lawn mower safety, and safety around animals.

The students participated in all the stations by answering and asking questions, and were given visible examples of what not to do and what you must do when confronted with a situation that may jeopardize one’s personal safety.–Lauren Stuckey, reporter