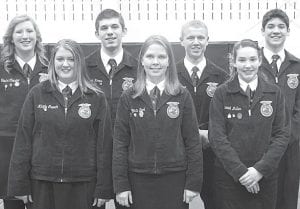 The president is Logan Nofziger. He is a junior involved in baseball, basketball, the Fellowship of Christian Athletes (FCA), Pettisville Ever-Ready 4-H club, Pettisville Missionary Church youth group, and FFA.

The secretary is Trisha Cousino, and a junior. Her supervised agriculture experience project is raising market and breeding California and New Zealand rabbits.

Chrysta Beck, the treasurer, is a junior. She is a member of Spanish Club and NHS.

Mikayla Crouch is the reporter. She is a sophomore and shows beef cattle at the Fulton County Fair.

Hannah Meller is the sentinel. She is a sophomore and has received many ribbons and trophies with dairy and horses through her 4-H Club. 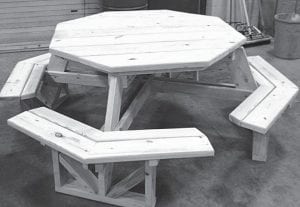 Using money generated by the Outdoor Power Equipment Clinic, members of the Archbold FFA built an octagonal picnic table, above, and a King Arthur glider that were donated to the ABC 4 Maddy auction.– courtesy photo

Josiah Hoops, a junior, is the student advisor. He plans to major in agronomy and ag business in college.

Meller, Cousino, and Crouch went to district offi- cer training and the District I FFA Banquet, Tuesday, April 16. They learned leadership skills, how to keep minutes, and complete the scrapbook.

The Archbold FFA chapter held its Power Equipment Clinic, Saturday, April 13, at AHS. The clinic was an opportunity for the community to bring in any lawn mower or yard equipment to be serviced, repaired, and cleaned for the upcoming season. 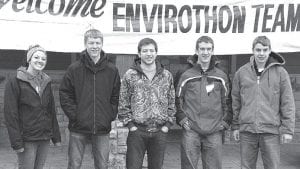 Customers could offer a freewill donation for any services performed, with all proceeds being put toward the building of a picnic table and swing, made by FFA members, that was donated to the ABC 4 Maddy Relay for Life team auction.

Ten members were involved in the clinic. They gained valuable team-working skills while working in pairs to service the various pieces of equipment that arrived.

The picnic table and glider swing were built by the agriculture education classes as a project, and involved more than 50 students.

Five members competed in the Area I Envirothon at the Ottawa Wildlife Refuge, Wednesday, April 24.

The Envirothon is a competition that tests a team’s knowledge on aquatics, soils, forestry, wildlife, and environmental issues.