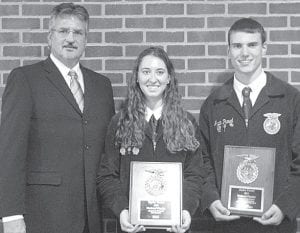 From left: Michael Lane, PHS principal, with Taylor Kruse and Justin Pursel. Lane watched Kruse and Pursel on stage in the National FFA Proficiency Finals competition. Each member was awarded $500 for being a national finalist.– courtesy photo

On the way to the convention, members toured Tuttle Orchards outside of Indianapolis. Members learned how they use their high-tunnel greenhouses and what kinds of apples they grow.

In the afternoon, Justin Pursel and Kruse participated in the National Profi- ciency Awards interview process. They were interviewed by a committee about their Supervised Agriculture Experience projects. Pursel’s SAE was in Environmental Systems; Kruse’s, in AgriResearch Plant Systems.

Both were top four finalists in the nation and finished runners-up.

Catlett is an economist/ futurist with a message designed to get people to make connections and plan for the future.

During the evening session, students heard the retiring address of Alicia Hodnik, Central Region National vice-president, and were inspired by Josh Bleill, an Indianapolis Colts spokesperson and injured war veteran who lost both legs in action.

During the Alumni Convention, Donna Meller was recognized as one of three National Alumni Achievement winners. Cathy Nofziger and Mr. and Mrs. John Poulson served as delegates from Ohio to the alumni business session.

All headed to the Lucas Oil Stadium to see Rebekah Meller receive her American FFA Degree on Saturday morning. The FFA degree is a degree that only recognizes 1/2 of 1% of all members. It is the highest degree FFA awards.–Annie Eicher, Pettisville FFA reporter