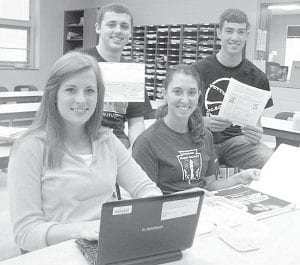 The Pettisville Agriculture Business II Class completed multiple projects for a Nutrients for Life Foundation contest and won $5000 from the Nourishing Our Planet in the 21st Century program. Representing the class, from left: Natalie Hubby, working on a Jeopardy-style Power Point training tool; Logan Beck, holding the check; Taylor Kruse, showing the curriculum materials provided by the Foundation; and Aaron Bruner, holding the flier the class created and shared. At the state FFA convention earlier this month, Pettisville was one of two Ohio FFA chapters winning the award.– courtesy photo

Thirty-three members and chaperones from the Pettisville FFA chapter recently attended the 84th annual State FFA Convention, May 3-6, in Columbus.

Many members were recognized for their outstanding work over the past year.

Eleven members and eighth graders participated in either the agriscience fair or state proficiency judging, Thursday morning, May 3.

At the same time, the rest of the FFA members and chaperones took a tour of a chocolate factory.

“The making of the chocolate caramel snowmen was a unique and fun experience,” said Kelsey Weirauch, a junior.

From the Nourishing the Planet group, the chapter was named as one of two first-place winners in the Nutrients for Life contest. Pettisville FFA received a $5,000 check to use on expanding the project.

The ag classes explored soil health and shared information on food availability and safety as part of their work for this project.

During the first session of convention, the chapter was recognized for its donations to Children’s Hospital and CROP World Services. 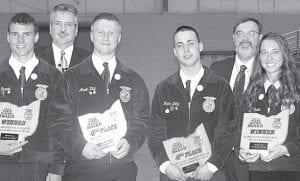 During the second session, Donna Meller, a science teacher at Pettisville, was awarded the Honorary State FFA Degree. She has been active in supporting the local, state and national agriscience fairs as a coordinator, teacher and judge.

Chrysta Beck was recognized for winning her category for agriscience fair last fall at the National FFA Convention.

At the third convention session on Friday morning, Taylor Kruse was recognized for her proficiency area in Specialty Animal Production. She placed second overall in the category.

At the fourth session, Nathan Spotts, treasurer, and Annie Eicher, reporter, were recognized for receiving gold ratings on their officer books.

Kruse and Meller have the chance to present their projects at the 2012 National FFA Convention this fall in Indianapolis, Ind.