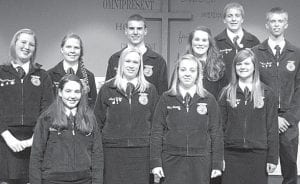 Hannah Meller received the Star Greenhand award for her participation in FFA and her work with Supervised Experience Projects.

The Star Chapter FFA award was given to Chrysta Beck. The award depends in part on the Supervised Agriculture Experience program, or SAE. She also participated in more FFA functions than any other Chapter Degree recipient.

Jack and Peggy Kruse were elected as honorary members. 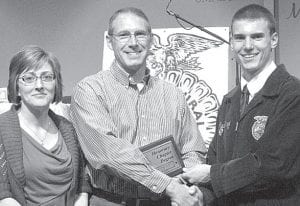 All earned District 1 firsts or seconds, but some won’t know which placing until after the state convention in May.

King, Pursel, Betz, and Kruse are all finalists in the state competition.

Arrin Short was recognized as the pest hunt top performer. He also received the records and accounting award for having good re- cordkeeping and organization skills.

The scholar award was given to Nathan Spotts for having the highest GPA out of the junior and senior class. He has a 4.0.

Other awards and scholarships handed out:

Positive Points Performer awards are given to the top 60 percent of each class to recognize the most active FFA members. Thirty-two members received FFA bags.

Katie Nofziger, daughter of Curt and Judy, was crowned the 2012-2013 sweetheart. She was crowned by last year’s sweetheart, Taylor Kruse.