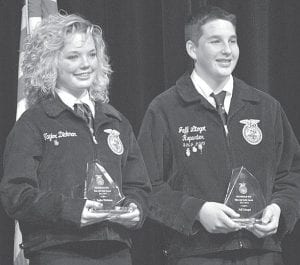 Every high school FFA member received at least one award.

A 15-minute slide show of the competitions and activities the chapter participated in throughout the year was shown.

The evening also included recognition of individual awards for outstanding leadership, accomplishments,and service to the chapter. Members who received the Star Greenhand award, given to first-year members, were Short, Hannah Hesterman, Stuckey, and CJ Brubaker.