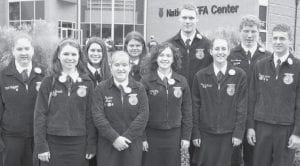 While on their way to convention, Wednesday Oct. 24, they toured the Chicago (Ill.) Mercantile Exchange. Students also viewed the skyline from the Sears Tower.

Rebekah Meller, and Lynae Fry presented their agriscience fair projects, Friday, Oct. 26. Meller’s project was “A comparative study of the effectiveness of various forms of allium sativum and antibiotics on bacteria.” She received a gold rating and was third in her division.

Fry’s project was “Testing sugar content in beta carotene, and dry matter in cucurbits.” She received a silver rating. 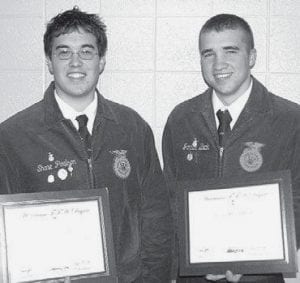 Beck was a state first runnerup in food processing. He majors in animal science at Ohio State University and works at the OSU sheep and beef barns and the meat lab. His parents are Dave and Cathy Beck. 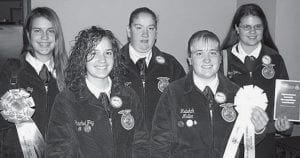 He majors in ag business at OSU and works at the OSU Swine Barn. His parents are John and Lexie Poulson.

The convention theme was “Blue Jackets, Bright Futures, which means by wearing FFA jackets, FFAers are set apart from others, and have many more opportunities to achieve more in their lives.

The convention was inspirational, and helped motivate and strengthen the Pettisville leadership.- Libbey Eicher, reporter

His other supervised agricultural experiences were raising feeder calves, corn, and soybeans.

A sophomore at Tri-State University majoring in mechanical engineering, he plans to use his skills in the agricultural field. King’s parents are Pete and Luana. His sister, Gina, received her degree last year.

Logan Wyse served as the student advisor for the chapter his senior year and has been honored with awards at the state and national conventions. He has been on the poultry judging team, soils judging team and the parliamentary procedure team.

Wyse’s job placement consisted of working at Wyse Electric Motor Repair, Archbold. In 2005 he won the agriculture mechanics energy systems maintenance and repair profi- ciency award at state, and was a national finalist.

Wyse attends the University of Northwestern Ohio, Lima, studying the field of high performance automobiles. His parents are Patrick and Carleen, Archbold.