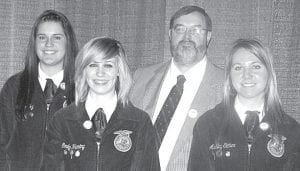 Lynae Fry, Emily Herring, and Ashley Eicher, from left, were awarded the State FFA Degree at the State FFA Convention, Saturday, May 1. With them is John Poulson, Pettisville FFA advisor.– courtesy photo

Several Pettisville students attended the Ohio FFA state convention in Columbus the weekend of April 29-May 1. The theme was “Lead Out Loud.”

Thursday activities included the science fair, setup of the FFA Alumni booth, and a visit to the “Horseshoe,” the football field at Ohio State University.

The convention consisted of five sessions, where FFA members learned about leadership. Within each session, students’ hard work was recognized and rewarded. Speakers talked about life experiences and performed interesting stunts.

Hundreds of awards were handed out, including some to Pettisville students.

Nofziger was named District 1 Star Farmer. Rebekah Meller was the agriscience Student of the Year.

Tim Spiess was the State Star in agribusiness and the state winner in ag entrepreneurship.

Krista Spiess, Herring and Blosser were recognized on stage for receiving gold ratings on their officer books.

Pettisville was recognized for donations to CROP and Children’s Hospital.

Pettisville was recognized for placing second in the state for Harvest for America, a pilot project in Ohio last year that promoted gleaning and food donations.–Brooke
Betz, assistant reporter