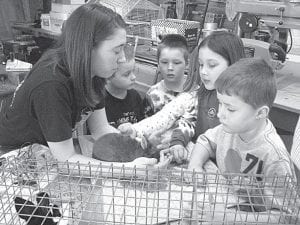 February was filled with many accomplishments by the Pettisville FFA chapter.

Several students traveled to attend an interview at state evaluation for their proficiencies. All placed in the top four in the state.

Spiess and Nofziger interviewed for Star State Degree awards. Both were first in District 1, and Spiess advanced for further interviews.

This degree is awarded after a member has completed the requirements as set by the National FFA constitution and already received a Greenhand degree.

It is the first level of membership given to a student when all requirements have been met.

FFA Week was a success. The chapter had an official FFA apparel day and pancake breakfast for alumni, FFAers and staff.

An Animal Day, which covered the medications and grooming of the animals, was presented. Six animal species were covered.

Members also worked very hard to have a hoop shoot tournament with proceeds going to Children’s Hospital and Crop World Services. The FFA will donate $200 to each charity. Winning the shoot-off were Troy King and Nathan Spotts.