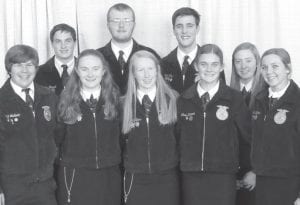 Both presented to a panel of judges and earned gold ratings. Each project was one of 12 selected per category and division in the nation to compete at National FFA Convention.

Every state may enter one applicant per division/category; there are six divisions.

Wyse, daughter of Gene and Judy, was a finalist in her proficiency in agriscience research-plant systems category. She had to present a two-minute overview of the projects she has done the last four years related to the proficiency and then was interviewed for 15 minutes.

Only four students in the nation are selected to present their proficiency in each category. Only .00029% of the total membership of more 700,000 members achieve this accomplishment.

A runner-up, Wyse won a medallion and a cash prize from the National FFA Foundation.

Gretchen Lee, Pettisville FFA graduate and past Ohio State FFA secretary, was one of nine members to serve on the nominating committee to select the 2019-2020 national FFA officer team.

To be appointed to the committee, she had to be nominated, complete an application, read material from 44 applicants, and spend seven days in training and interviews with the candidates.

In addition to going to convention sessions, Pettisville FFA members and chaperones toured the Indiana State Museum; went to the Career and Business Expo; and attended The Blue Room, where there are businesses that are making advancements in any part of agriculture to minimize waste in the world.

The group watched as state winners competed in the parliamentary procedure contest– the way meetings should be run in a formal setting.

When asked what she thought of the national FFA convention, Jessica McWatters, PHS FFA president, said “I thought it was different than the past few years. I feel that there was a change in the energy of it with the session center changed to Lucas Oil Stadium, but it was good as it always is, and I really enjoyed it.”

Clara Damman said, “I loved it. It was fun to learn about other chapters and to learn more about our own.”– Andrew Hulbert, reporter