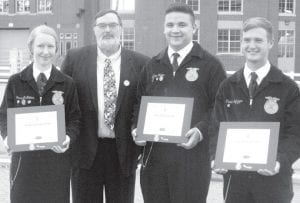 Kayla Wyse, Baden Skates and Jessie McWatters all earned gold ratings in the agriscience fair. Skates and Wyse placed first in their divisions and category. Their research reports will be submitted to national competition in July.

The chapter received recognition for being a Gold Medal chapter and as a Charitable Giving chapter.

John Poulson, chapter advisor, was recognized as the winner out of 10 nominees for the Golden Owl Award.