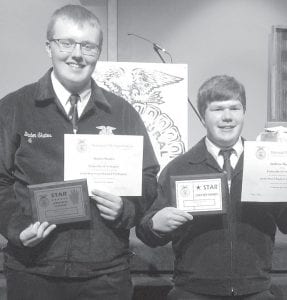 The Pettisville FFA chapter held its 69th Parent- Member banquet, Thursday, April 11, where students were awarded for their work they put in over the year.

There were 20 Greenhand FFA Degree recipients. The Greenhand Degree is given out as the first degree.

The star Greenhand this year was Baden Skates. He got the award for his attendance at multiple meetings, competing in state soils, and attending agriscience. He also attended national and state conventions.

Eight FFA members received the Chapter FFA Degree, the second and last degree given out by the chapter.

Honorary members were Gene and Judy Wyse. They were elected because of their support of the chapter over the years. They have chaperoned and attended state and national FFA conventions.

Both are members of the alumni affiliate; Gene is on the ag advisory committee.

Gretchen Lee, a Pettisville graduate and current FFA state secretary, spoke on how the little changes that we make transform into huge solutions to big problems.

CDE award pins were handed out to students who met one of the requirements for being in the top four in the district or county:

•Emma Salmi was second in the county in creed. Kayla Wyse was first in advanced prepared public speaking and third in the district.

•In Urban Soils, Gideon Myers was recognized for placing second in the county and the team Clara Damman, Carson Bennett and Baden Skates placed second in the district team.

The pest hunt was won by Baden Skates, followed by Madeleine Wixom and Blake Eyer.

More than 30 members were recognized for having A grades in ag in the third nine-week period and for being part of the top-point performers.

The winner of the junior achievement award was Jessie McWatters. She attended state and national FFA conventions, went to Washington Leadership Conference and Leadership Night, plus many other activities.

The senior achievement winner was Kayla Wyse. Among her activities, she attended state and national FFA conventions, presented at the county public speaking contest, and went to Leadership Night.

Retiring Chapter Sweetheart Elizabeth Beck was given a half-dozen roses. Ava Holyman, new Sweetheart, was given her tiara from Beck plus a trophy and a single rose. Hoylman will help with chapter public relations.