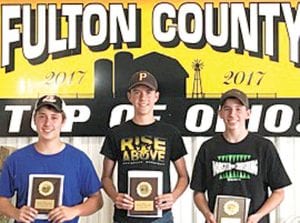 Drake McKeever, Logan Rufenacht and Stetson Aeschliman, from left, placed first in the Fulton County 40-bale division of the Straw Stacking contest on Jr. Fair Day at the Fulton County Fair. They are junior members of the Pettisville FFA. Their time was 4 minutes, 20 seconds. They loaded the bales onto the truck, then Aeschliman drove over the obstacle course and then restacked them. They had no penalties.– courtesy photo

Pettisville had multiple students participating in the 2017 Fulton County Fair with FFA projects.

Jacob Dennis had champion soybeans while Gretchen Lee had best use of photography in a communication project.

Throughout fair week, students had the chance to enter various events. The team of Stetson Aeschliman, Rufenacht, and Drake McKeever placed first in the straw stacking 40-bale division.