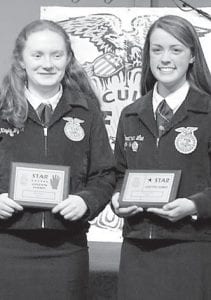 The Star Greenhand Award was given to Kayla Wyse for her participation in Career Development Events (CDE), Agriscience Fair and for her Supervised Agricultural Experience (SAE) projects.

The Star Chapter FFA Award was given to Gretchen Lee. It is an award that is given to the student who has a strong SAE and is active in the chapter.

Jeremy & Kim Crouch and Curt & Judy Nofziger were elected as honorary members. Both have supported the chapter over the years. 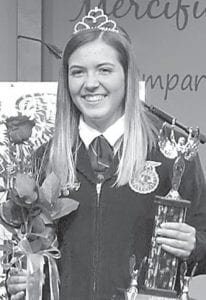 Meller competed in Agriscience Research-Integrated, which consisted of her research projects that she did throughout high school. She is also a finalist for the Ohio Star in Agriscience.

Dennis did a research proficiency in the category of Plant Systems, which consisted of the research that he has done on soybeans.

All three placed first in the district and will compete as top-four finalists at the state level.

The award is meant to encourage advancement to the district level.

Several members were recognized for their participation in CDEs. Kayla Wyse placed first in the county and seventh in the district for Creed Speaking. 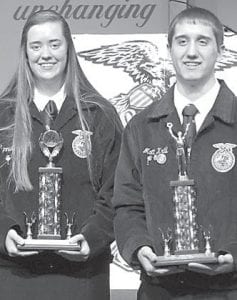 Gretchen Lee placed first in the county and the district and eighth in the state in Beginning Prepared Public Speaking.

Jordan Skates placed first in the county and fourth in the district in Advanced Prepared.

Jacob Dennis placed second in the county and third in the district in Extemporaneous Speaking.

The parliamentary procedure team of officers placed second in the county and eighth in the district.

Jordan Skates, secretary, and Lynnsey Crouch, treasurer, were recognized for their gold-rated officer books. Jacob Dennis, reporter, was recognized for his silver rating on his scrapbook.

Hannah Meller, Jacob Dennis, Gretchen Lee, Jordan Skates and Kayla Wyse attended State Agri-science fair in May 2015 and were recognized for their accomplishments.

In addition to the state competition, Meller, Lee and Skates earned gold ratings at the National Agri-science Fair in October 2015.

The Scholar Award was given to Lynnsey Crouch. She had the highest overall GPA (3.95) out of the junior and senior agriculture students.

The Pettisville FFA Alumni and Friends gave out four $500 scholarships to Pettisville graduates who are attending college and plan to have a career in agriculture. Recipients were Chrysta Beck, Josiah Hoops, Dustin Nofziger, and Mikayla Crouch.

The Ron Rupp Leadership award was given to Matthew Krill. The award is determined from votes from the FFA members and points from the chapter leadership chart.

He served as the FFA president for 2015-16 and was the chair of three committees.

The Positive Points Performer Award is given to the most active of each class. Thirty members received the award.

Madison Stuckey was crowned the 2016-2017 Sweetheart. She was crowned by last year’s sweetheart, Aleeyha Kurth.