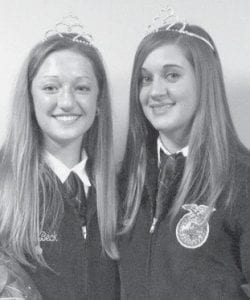 Laura Bruner, a 2005 PHS graduate, was the speaker. She talked about her trip to Brazil and Costa Rica. She won the Costa Rica trip through the FFA and went through the Ohio State University for the Brazil trip.

Michael Lane and Brian Short became honorary members. Principals, school superintendents, farmers, business people, and others who support the FFA and agriculture education may be elected to this membership.

Krista Spiess was recognized as the only top career development event performer who will receive a pin. To receive a pin the team has to have placed in the top three or the individual member has to be in the top four in district competitions or in the top 10 in the state.

Dylan Weirauch was recognized as the winner of the pest hunt for collecting the most points out of a total of 10,820. Ten members participated.

Tim Spiess received the records and accounting award, which goes to the member who practices good analysis, recordkeeping, and organizational skills.

Harris King received the scholar award, given to a junior or senior who has the highest grade point average.

The alumni senior scholarship was given to Luke Short. Jordan Beck received the alumni college scholarship.

The Ron Rupp Leadership Award, given to a junior or a senior, went to Josh Bruner.

Tim Spiess and Lucas Nofziger were awarded the Junior Achievement award. The Dekalb agricultural accomplishment award was given to Josh Bruner. These awards go to a junior and senior who have a high score in leadership, scholarship, and the SAE program.

Lucas Nofziger recognized top point performers. There were 34 winners. The winners scored leadership points in the top 60% of their class.